It’s not too late to get a flu shot 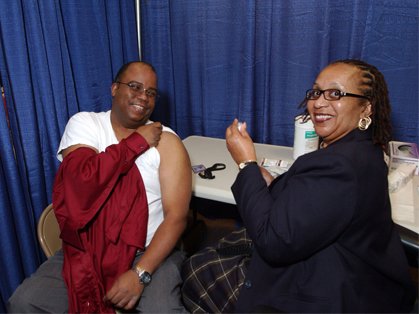 It only takes 10 seconds and the subtle stick of a small needle and most of the myths surrounding the flu shot immediately disappear. NIH.gov

It only takes 10 seconds and the subtle stick of a small needle and most of the myths surrounding the flu shot immediately disappear.

“Once people realize that the needle isn’t some cartoon-like long needle and it will hardly sting, perhaps they’ll be more willing to get the vaccination,” said Ray Bridgewater, president of the Assembly of Petworth, an organization located in Washington, D.C. that uses grassroots strategies to address critical health issues impacting African Americans, Latinos, and other ethnic groups suffering health disparities.

Bridgewater, 55, said convincing minorities to get the flu shot often proves challenging. He said African Americans in particular buy into legends or unfounded speculation about the vaccine.

“The biggest myth is that it will make you sick,” Bridgewater said. “What people don’t understand is that the flu doesn’t take effect immediately, it’s a two-week process that builds up. So, some may already be sick when they get the shot. Then, there are those who argue that if they get the flu shot they’ll get really sick. That’s simply not true.”

To help put to rest the many uncertainties surrounding the flu shot, Bridgewater joined with the Department of Health, the United Planning Organization and the National Coalition on Black Civic Participation in a campaign aimed at encouraging minorities to get the vaccine.

The coalition also continues to spread the message that it’s not too late to get the shot. “Flu season typically peaks in February and can last as late as May,” said Dr. Anne Schuchat, an assistant surgeon general at the U.S. Public Health Service in Southwest and director of the Centers for Disease Control and Prevention’s (CDC) National Center for Immunization and Respiratory Diseases in Atlanta, Ga.

“We are encouraging people who have not yet been vaccinated this season to get vaccinated now,” said Schuchat, 54, the doctor whom Oscar-winning actress Kate Winslet consulted with and modeled her character after in the 2010 movie, “Contagion.”

“There are a lot of people who are hospitalized because of the flu,” said Bridgewater, who earned an honorable mention award in the Immunization Coalitions/Public Health/Community Campaign category during the 2013 National Adult and Influenza Immunization Summit in Atlanta.

Bridgewater also received recognition for his contributions toward increasing vaccination uptake in Maryland, Virginia and Washington.

“It’s just important to educate people about the flu and the vaccine,” Bridgewater said. “The shot really works and we’re becoming very successful in getting folks to get the shot in Washington, Northern Virginia and in Maryland.”

Officials at the CDC said, over a 30-year period between 1976 and 2006, estimates of yearly flu-associated deaths in the United States ranged from a low of about 3,000 to a high of about 49,000 people during the most severe season.