Minimum wage hike could mean a raise for all 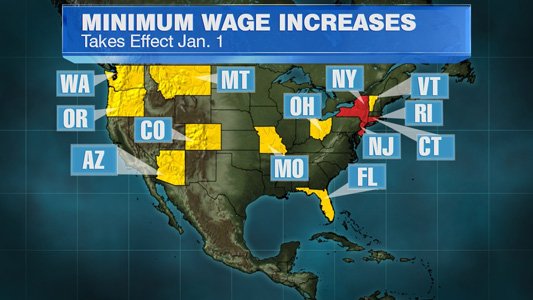 Starting January 1, 2014, minimum wage workers in 13 states and four cities will see higher paychecks. While most of the increases amount to less than 15 cents per hour, workers in places like New Jersey, Connecticut, New York and Rhode Island will see a bigger bump. CNN

NEW YORK (CNNMoney) — When New Jersey increased its minimum wage this year, Dolores Riley gave raises to all 16 employees at her childcare center. But it wasn't because they were all making $7.25 an hour.

In fact, only five staff members at Gramma's School House were affected when New Jersey upped its minimum wage to $8.25. But Riley didn't want to increase the pay of the least experienced employees without also rewarding those who had been there the longest. So she increased everyone's pay by $.25 an hour.

Riley is not alone. When there's a minimum wage increase, some small business owners will raise the pay for most, if not all, hourly workers in order to preserve their wage structure and retain quality employees.

That's what economists call a ripple effect, meaning an increase in the minimum wage spills over to higher wage brackets.

On Jan. 1, 13 states raised their minimum wage (by varying degrees), and on July 1, California will increase its by $1 an hour.

As a result, the Economic Policy Institute estimates about 4.6 million workers will see their wages increased, 2.6 million of whom are directly affected as the new minimum wage exceeds their current hourly pay. The other 2 million already make slightly more than the new minimum wage but will benefit from the ripple effect.

And it could well be the entire country that sees an increase soon. Congressional Democrats and President Obama are pushing to raise the federal minimum wage from $7.25 an hour to $10.10 by 2015.

For Joann Marks, who owns Florida-based marketing company Cosmetic Promotions, that would require raises for all six of her hourly workers, even though they are paid at least $10 an hour, well above Florida's current minimum wage of $7.93.

She would also increase the pay of two of her salaried employees. Broken down, their compensation is equal to about $11 an hour, and Marks wants to pay them more than just above the minimum rate.

When wages increase, business owners are left with two options: cut back on staff or raise prices. But sometimes, one or both of those can't be easily altered.

About 75% of Cosmetic Promotions' business comes from partnerships with chain stores where prices are already set by a contract. So Marks expects to cut one worker from her staff of 15 if the new federal wage is approved.

"We work better with all these people, but we'd survive if we had to lose one," Marks said.

Meanwhile, Riley's hands are tied when it comes to the number of employees at Gramma's School House. The state mandates how many caregivers she must have in the room based on the number of children.

And raising prices is not appealing. As the economy weakened, parents lost jobs and no longer needed her services. Riley says she's making only a quarter of what she made before 2008 and enrollment is still declining.

"I just keep paying out of my own pocket," she said.