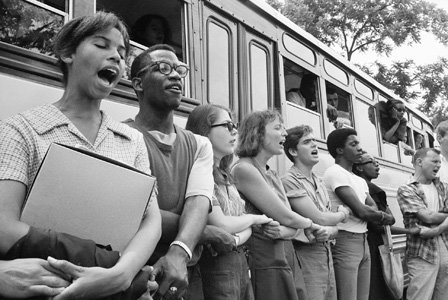 On Friday, January 17, 2014, the Newseum opens “1964: Civil Rights at 50,” a yearlong exhibit about Freedom Summer, a bold campaign organized by civil rights groups in 1964 to register black voters in Mississippi. (Above) Student civil rights activists join hands and sing as they prepare to leave Ohio to register black voters in Mississippi. The 1964 voter registration campaign was known as Freedom Summer. The Newseum is located at 555 Pennsylvania Avenue, N.W. in Washington D.C. For more information, visit: www.newseum.org. Photo Credit: Ted Polumbaum/Newseum Collection

On Friday, January 17, 2014, the Newseum opens “1964: Civil Rights at 50,” a yearlong exhibit about Freedom Summer, a bold campaign organized by civil rights groups in 1964 to register black voters in Mississippi.

“1964” features powerful images of Freedom Summer, from volunteer training sessions in Ohio to clashes with segregationists and the search for three missing civil rights workers who were later found murdered. The photographs were taken by Ted Polumbaum, a freelance photographer working for Time magazine, whose passion for social justice led him to Mississippi in the summer of 1964. The Polumbaum photographs are part of the Newseum’s permanent collection and will be on display in the exhibit through December 28, 2014.

“The exhibit powerfully illustrates the risks that student activists took 50 years ago to defeat segregation,” said Cathy Trost, vice president of exhibits and programs at the Newseum. “Photojournalist Ted Polumbaum recorded the dramatic events of Freedom Summer and left behind a remarkable collection of images capturing key moments in the fight for civil rights.”

On January 18, at 2:30 p.m., Nyna Brael Polumbaum and Judy Polumbaum, Ted Polumbaum’s widow and daughter, will discuss his photographs and legacy as part of the museum’s Inside Media series. The program is included with paid admission to the Newseum.

Over a 40-year career, Ted Polumbaum (1924-2001) covered some of the biggest stories of his time, including the civil rights movement and Vietnam War protests, for the newsmagazines Time, Life and The Saturday Evening Post.In 2003, his widow, Nyna Brael Polumbaum, donated more than 200,000 of his images to the Newseum’s collection.

“1964” is a companion exhibit to “Make Some Noise: Students and the Civil Rights Movement,” which opened at the Newseum in August 2013. “Make Some Noise” spotlights key figures in the student civil rights movement, including John Lewis, now a U.S. representative from Georgia, and Julian Bond, who later became chairman of the NAACP. The exhibit also features a section of the original F.W. Woolworth lunch counter in Greensboro, N.C., where in 1960 four African American college students launched the sit-in movement, and a bronze casting of the Birmingham, Alabama jail cell door behind which the Rev. Martin Luther King Jr. penned his famous “Letter From Birmingham Jail” in 1963.

The Newseum’s Digital Classroom website features a free learning module called “Making a Change,” which explores the civil rights movement through the lenses of historical connections, media literacy, and civics and citizenship using videos, archival news footage and interviews. These standards-aligned lesson plans will help teachers enhance student engagement with Newseum content, their communities and their peers across the country.

The Newseum is located at 555 Pennsylvania Avenue, N.W. in Washington D.C. For more information, visit: www.newseum.org.