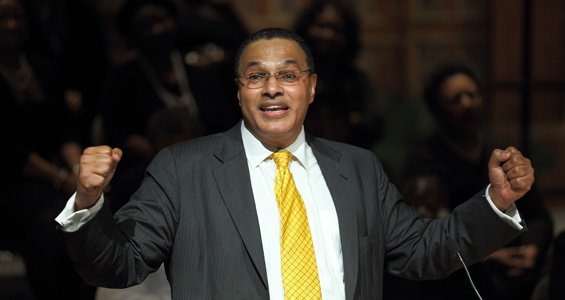 BALTIMORE — The Johns Hopkins community gathered on Friday, January 10, 2014 to celebrate the civil and human rights legacy of Martin Luther King, Jr. A packed Turner Auditorium paid tribute to King’s memory and heard words of inspiration from a leader in the fields of education and civil rights.

Freeman Hrabowski III, president of the University of Maryland, Baltimore County (UMBC), spoke to the Johns Hopkins community about leadership and about his experience as a child in 1960s Birmingham, Alabama.

Hrabowski recounted a story of being arrested as a 12-year-old protesting the 1963 bombing of the Sixteenth Street Baptist Church in Birmingham, which killed four young girls. As he and other children sat in the Birmingham jail for days, they heard King speaking outside.

“All of our parents were outside the jailhouse,” Hrabowski recalled. “And Dr. King said to all these children who were behind bars, ‘Stay strong. For what you do, this day will have an impact.’”

Reflecting on King’s legacy Hrabowski said, “The message of King must be that each of us is a leader.” He continued, “and that we must think about how we treat people of all types. We must be supportive of people who are different from ourselves and appreciate them.”

In its 32nd year, the annual celebration of King’s legacy has become a Johns Hopkins institution. Hrabowski joined a distinguished list of leaders who have spoken at the celebration, including Archbishop Desmond Tutu, Coretta Scott King, Martin Luther King III, Jesse Jackson, Stevie Wonder and many others.