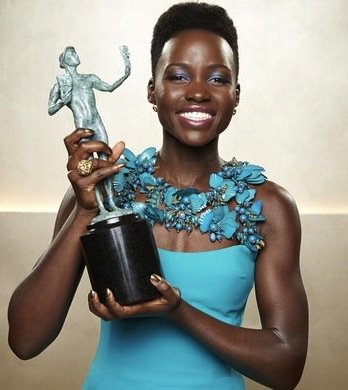 Lupita Nyong'o' won a supporting actress award for her performance in "12 Years a Slave," at the SAG Awards. Credit: Kevin Mazur/Turner Broadcasting

Leto, who stars as a transgender woman in "Dallas Buyers Club" -- a film about the AIDS crisis in the 1980s -- paid tribute to those who have been victims of "that terrible disease."

Nyong'o, who plays a slave terrorized by a plantation owner in "12 Years a Slave," won over competition that included Oprah Winfrey ("Lee Daniels' The Butler") and Jennifer Lawrence ("American Hustle").

"12 Years" and "Hustle" are among the leader Oscar nominees, and at the SAG Awards the two films are also facing off for outstanding ensemble -- the SAG Awards' equivalent of Oscar's best picture. "12 Years," about a freeman forced into slavery in 19th century America, led all SAG Awards nominees with four nominations.

Among the other challengers for ensemble are "August: Osage County," the sprawling comedy-drama based on Tracy Letts' play. It received three nominations.

The SAG Awards varied from the Oscars for a number of its nominations. "Lee Daniels' The Butler," which didn't get nominated for a single Oscar, earned three SAG Award nominations: ensemble, lead actor (Forest Whitaker) and female supporting actor (Oprah Winfrey).

Winfrey addressed the controversy about not being nominated for Oscar with CNN's Nischelle Turner.

After praising all the other supporting actress nominees, she pointed out that "The Butler" -- a box-office success -- has had an impact.

Gandolfini is one of two performers nominated posthumously. Paul Walker, who died in November, is nominated for performance by a stunt ensemble along with his colleagues in "Fast & Furious 6."

Along with "Hustle," "12 Years," "August: Osage County" and "The Butler," "Dallas Buyers Club" rounds out the nominees for outstanding ensemble.

Like the Globes, the SAG Awards also nominate television performers.

Nominees for ensemble in a drama are "Boardwalk Empire," "Breaking Bad," "Downton Abbey," "Game of Thrones" and "Homeland."

Members of the cast of "Downton Abbey" were pleased with their nomination for outstanding ensemble for a drama series, but responded in unison when asked who was going to win.

For performers, the Screen Actors Guild Awards represent recognition from their peers. The trophy is even called "the Actor."

For Oscar watchers, the awards offer a key indicator of which away the wind is blowing among members of the Motion Picture Academy. The actors' branch is the largest of any of the academy's voting blocs.

But the SAG Awards' selections don't always match the academy's. Two years ago, "The Help" beat "The Artist" for outstanding ensemble. Before that, "Inglourious Basterds" beat "The Hurt Locker."

The red carpet was its own challenge for some celebrities.

Lawrence said that her Dior couture gown was "squeezing my breasts into my armpits."

And Paulson, who is nominated as part of the ensemble with "12 Years a Slave," was dressed in a somewhat flowy white dress. Complimented on the look, she could only laugh.

"(People will say), what's with your weird princess dress?" she said, addressing the reaction.

The 20th Annual Screen Actors Guild Awards air on both TBS and TNT. Both networks are part of Time Warner, as is CNN. There is no host for the awards, but presenters include Amy Adams, Tina Fey, Benedict Cumberbatch and Jeremy Renner.