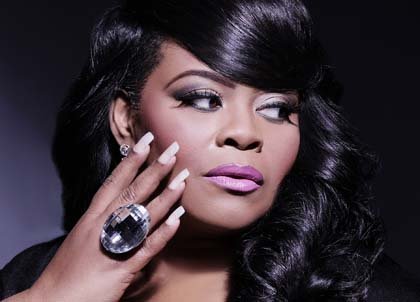 Singer, songwriter and Charm City native, Maysa Leak, has captured her first Grammy nomination for Best Traditional R&B Performance for the song, “Quiet Fire,” from her CD, “Blue Velvet Soul.” She hopes that she walks away with the trophy when the Grammy Awards are broadcast on CBS on Sunday, January 26, 2014. Courtesy Photo: Clarke & Associates LLP

Leak, who recently returned home to perform a benefit concert, says she is thrilled about the honor and hopes that she walks away with the trophy when the Grammy Awards are broadcast on CBS on Sunday, January 26, 2014.

“Receiving a Grammy nomination for the first time in my 22 year career is incredible and means the world to me, but to get it for a song from my tenth solo CD is even more significant because I struggled to make this record so soon after the passing of my mother, Laura Leak,” the singer said. “I truly poured my heart and soul into this record, so this is a great milestone not only in my career, but my life as well. I have been dreaming of and praying for a nomination since I was a little girl. I’m so grateful.”

In October 2013, Leak returned to the area for a special performance for the Children’s Home in Catonsville, Maryland where officials provide much-needed care for many of Maryland’s underprivileged youth.

Once an individual is admitted to the Children’s Home, officials said the immediate goal is to build up, serve and nurture them. The ultimate goal is to return the child to their home, if appropriate, or turn them over to a less restricted area or a foster care parent.

Children’s Home provides an education, recreation, and other skills all under one-roof in an effort to build life skills to enable them to become productive citizens.

“I know times are tough right now and many people are reluctant to spend their money, but it is my hope that they open their hearts and wallets and continue to support the Children’s Home,” said Leak, before announcing she would perform during the 150th anniversary celebration of the residential treatment center that provides treatment for young people who are victims of abuse, neglect, abandonment or family crises and need structured and supervised care.

Having collaborated with everyone from Stevie Wonder and Chaka Khan to Incognito and Angela Bofill, Leak is the kind of singer who takes hold of a song and enraptures her audience in the palm of her hands, as she delivers lyrics, phrases, melodies and harmonies in a way that only she can, according to music officials.

Blessed with an instantly identifiable honey-toned mezzo-soprano and an undeniably brilliant and magnetic stage presence, Maysa’s alluring vocals, candor, humor and purity as an artist make her a rarity in the music business.

“I’m just excited to be doing this and to now have a Grammy nomination,” she said.