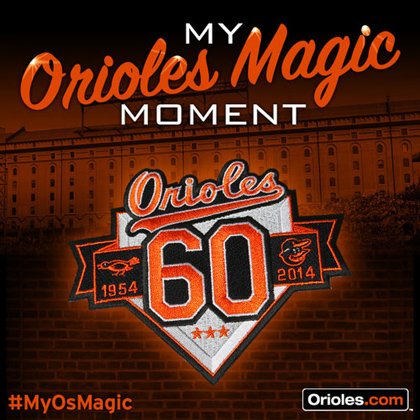 BALTIMORE — In celebration of their 60 years in Baltimore, the Orioles announced the launch of a 60th anniversary website: www.orioles.com/60. Featured on the website is a new video contest, “My Orioles Magic Moment,” inviting fans to recreate some of the amazing moments Birdland has experienced in the last 60 seasons.

Fans are invited to film a recreation of each month’s featured event in team history, then upload the video at www.orioles.com/60. Fans are also encouraged to share their My Orioles Magic Moment with friends on social media using the hashtag #MyOsMagic. January’s moment is Doug DeCinces’ home run on June 22, 1979 that has been widely credited as the beginning of Orioles Magic. A new My Orioles Magic Moment will be revealed at the beginning of each month through September.

One winning video will be chosen for each moment (nine winners total) and each winner will receive a prize package featuring four lower level tickets to an Orioles home game and an official 60th Anniversary baseball autographed by an Oriole. The winner’s video will also be featured on the anniversary site and promoted throughout the Orioles’ social media platforms.

The first entry period ends at noon on Monday, January 27, 2014. Orioles staff members will then judge the entries and select the winner based on creativity and relevance to the contest theme. Fans should visit www.orioles.com/60 to see a complete list of rules and to view the videos.

The www.orioles.com/60 page is dedicated to celebrating the Orioles’ storied 60-year history in Baltimore. Included on the page are complete team media guides from 1954-2013; the club’s all-time player roster, 60th anniversary gear and more. Fans are encouraged to visit the site often as new elements will be added throughout the year.