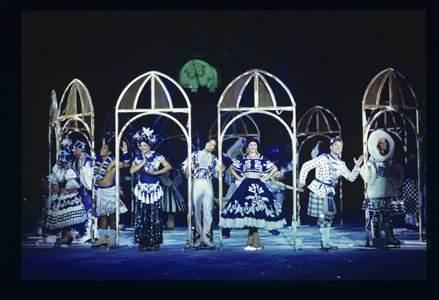 Marsean Oyler (third from left) and other skaters performing in the Disney on Ice production “100 Years of Magic.” Oyler portrays a band member in a Mickey Mouse routine and a soldier in a scene from Mulan. “100 Years of Magic,” which features 65 Disney characters, runs from February 5 through February 9, 2014 at the Baltimore Arena. Courtesy Photo: Disney on Ice

Disney On Ice is celebrating 100 Years of Magic, and the commemorative celebration is coming to Baltimore. The show, which features 65 Disney characters, runs from February 5 through February 9, 2014 at the Baltimore Arena. To date, 100 Years of Magic has entertained more than 135 million guests worldwide.

Marsean Oyler is among the skaters in the production, and he portrays a band member in a Mickey Mouse routine, and a soldier in a scene from Mulan.

“The show is amazing,” said Oyler. “We have a large cast of 46 skaters portraying characters from Finding Nemo, The Incredibles and other favorites. The show is a celebration of Disney’s work.” He added, “Getting to play a soldier in the Mulan number takes me back to when I was little. I love doing numbers to that music. It’s unreal. I have always loved Disney and getting to skate and being a part of the company has been really magical.”

The Knoxville, Tennessee native joined Disney in August 2013. “My first skating coach, Adam Blake joined Disney when he was 18 or 19, and told me how much fun he had when he was with Disney. He is a great mentor, and has really been instrumental. He put a lot of work into me. He is also skating on this tour, which is really great.”

According to Oyler, who is 20, he participated in a skating camp as a youngster and really enjoyed it.

“I have been skating ever since,” said Oyler. “Skating with Disney has been tremendous. There’s nothing like getting paid everyday to do what you love, and seeing the satisfaction and enjoyment on people’s faces who come to the shows. I wouldn’t trade it for anything else in the world.”

Oyler said the show has taken him to Chicago, New York, Texas, Tennessee, Missouri, Canada and other places.

“Skating in front of my family and friends in Knoxville, Tennessee was miraculous,” he said. “I got an opportunity to show what I had worked so hard for. It was spectacular.”

The Baltimore engagement marks Oyler’s first visit to the city. “This is my first visit to Baltimore. I am really looking forward to it. People are going to love the show. There is a little something for everybody.”

Oyler offered this advice to aspiring skaters: “Work hard and train every day,” he said. “Also, emulate someone you would like to be like. Adam Blake was such a big role model for me, that I emulated him.”

Feld Entertainment is the worldwide leader in producing and presenting live touring family entertainment, with 30 million people in attendance at its shows each year. Feld Entertainment's productions have appeared in more than 70 countries on six continents and include Ringling Bros. and Barnum & Bailey®, Feld Motor Sports, Disney On Ice and Disney Live!

Tickets are available from Ticketmaster at the Baltimore Arena box office. For more information call 800-745-3000 or visit www.ticketmaster.com.