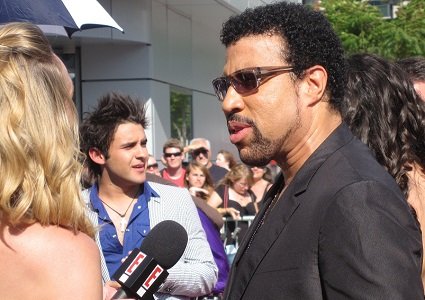 (CNN) — The 2014 BET Awards aired Sunday, and the show honored the legendary singer with the lifetime achievement award. The only problem was that Richie's last name was spelled "Ritchie" in the graphic, prompting the trending of #lionelritchie on Twitter and deliberate misspellings of his name.

But that moment was just one of the hits and misses for the night.

The star, recently released from jail, returned to the stage to perform his song "Loyal" with a little help from rappers Lil Wayne and Tyga. His performance energized the crowd -- and also sparked much discussion about his plaid fashion choice.

Plenty of TV viewers stayed up to catch what they believed would be a live performance by a superstar couple. Instead, the performance turned out to be a prerecorded video of the pair during a stop of their tour in Cincinnati. It was hot, but not live, and Billboard tweeted that "People are leaving the awards show in droves right now during Jay Z and Beyonce clip #BETAwards."

The comic hosted this year's ceremony, and he killed.

Rock poked fun at everyone from the performers -- of Chris Brown, he said the singer "just signed a new deal -- too bad it's a plea deal" -- to celebs in the audience, and even got topical with the controversy over racial remarks made by Los Angeles Clippers owner Donald Sterling.

The rapper and former "American Idol" judge won the best female hip-hop artist award and gave a speech that left many scratching their heads.

After declaring "I don't look at myself as a female rapper 'cause I know what I do," she went on to offer that "When you hear Nicki Minaj spit, Nicki Minaj wrote it," which some took to be a diss directed at new rapper Iggy Azalea. (Although Minaj quickly added "No shade," meaning she was not directing her remarks at anyone.)

Minaj then went on to describe her recent -- sort of -- near brush with death.

"I just want to say that the other day, literally, I didn't tell anybody this, I really thought I was about to die," Minaj said. "Like, I was saying my prayers to die. And I didn't even want to call an ambulance because I thought, 'Well, if I call the ambulance, it's gonna be on TMZ.' And I would rather sit there and die. And it made me realize -- I don't care anymore what anybody gotta say."

It may take us until the 2015 BET Awards to sort that one out.