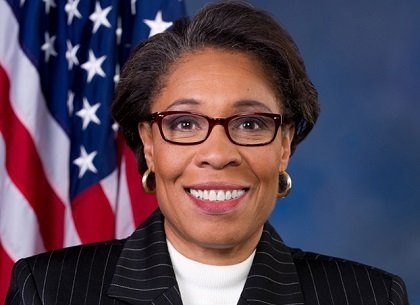 Congressional Black Caucus Chairwoman and Ohio Representative Marcia Fudge led a contingent of caucus members and several minority groups in a public plea to Republicans on June 18, 2014, to take up legislation that would restore the voting rights protections shot down last year by the nation’s highest court.

“Voter discrimination is real in America,” Fudge said. “We have a voting rights bill that has been sitting in the House for months and months and it’s being held up by Chairman Bob Goodlatte.”

The Congressional Black Caucus (CBC) and other Democrats have urged lawmakers to update the 1965 Voting Rights Act. In 2013, the High Court voted to strike down key components of the law, including allowing nine states to change their voting requirements without advance approval from the federal government.

Fudge and other Democratic legislators said Goodlatte, (R-Va.), who serves as the House Judiciary Chairman, has blocked efforts to get a bill passed that would restore portions of the law that the Supreme Court struck down.

Democrats are seeking greater protections for minority voters and they want to ensure that individuals aren’t turned away from the polls because they don’t have proper identification or for other reasons.

Goodlatte, 61, contends he will protect voter rights. “I fully support protecting the voting rights of all Americans,” he said. “As Congress determines whether additional steps are needed to protect those rights, I will carefully consider legislative proposals addressing the issue.”

However, with June quickly coming to a close and legislators preparing to return to their home states for summer break, without a resolution Congress would be hard pressed to pass a bill prior to the November midterm elections.

Democrats say many minority voters could find it difficult to cast their ballots without new amendments agreed upon by Congress.

“Voting is the language of the American democracy, if you don’t vote, you don’t count,” said Wade Henderson, president and CEO of the Leadership Conference on Civil and Human Rights.

“This principle has been echoed time and again by resounding bipartisan majorities in Congress and by presidents from both parties,” Henderson said. “The issue of voting rights has historically been and will forever be, bipartisan. The House Judiciary Committee cannot shrink from this historic obligation.”

CBC members and leaders of several other groups say they recognize this time as crucial in the battle to achieve a more balanced voting rights law.

“This is a critical time for action. As we approach the anniversary of [last year’s Supreme Court’s decision], we must act with renewed urgency in advancing the Voting Rights Amendment Act through the congressional process,” Miller said. “The looming risk of voter disenfranchisement threatens our democracy and failure to advance this legislation gives a free pass to voting discrimination.”

June marks the first anniversary of the Supreme Court’s decision to strike down portions of the voting rights law, as well as the 50th anniversary of Freedom Summer and the Civil Rights Act.

“More than ever, we must ensure that Latinos are able to exercise their constitutional right. Our community is rapidly growing and the Latino vote has never been more important,” said Democratic Texas Congressman Ruben Hinojosa, chair of the Congressional Hispanic Caucus.

“In the aftermath of [last year’s Supreme Court] decision, there are now seven million Latinos living in jurisdictions previously subjected to the pre-clearance requirement who are without vital voting rights protections,” Hinojosa said. “We must stand up and defend the right to vote for people of color.”

Democratic California Congresswoman Judy Chu, chair of the Congressional Asian Pacific American Caucus, says America has become a melting pot and those of all races should no longer face discrimination, particularly when voting.

“The American electorate is increasingly composed of communities of color,” Chu said. “As our populations continue to grow, it is critical that these voters are able to fully participate in the political process.”

“It doesn’t matter what race or ethnicity you are, what education you’ve attained, or money you have, voting is the great equalizer in our democracy and it must be protected,” Fudge said. “The Voting Rights Amendment Act of 2014 is a solution that addresses the problems we still face with discrimination in voting. We call on Chairman Goodlatte to have a hearing and bring this bill to the floor for serious discussion and debate.”