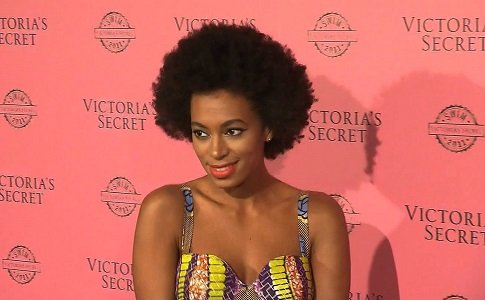 (CNN) — Solange Knowles still isn't saying what prompted her elevator confrontation with her brother-in-law, Shawn "Jay Z" Carter, but she will tell you one thing:

She's at peace about it.

The 28-year-old singer and younger sister of Forbes' world power Beyonce talks about the altercation in the August issue of Lucky magazine. Without going into detail about the brouhaha, which was caught on elevator surveillance video and dropped a bomb on Beyonce's otherwise composed and inaccessible public persona, Solange says that she's not dwelling on the past.

"What's important is that my family and I are all good," the younger Knowles says. "What we had to say collectively was in the statement that we put out, and we all feel at peace with that."

The now-infamous standoff occurred after the Met Gala on May 5, when Solange, Beyonce and Jay Z were seen leaving New York City's Standard Hotel. As security footage released by TMZ showed, Solange Knowles appeared to attack her brother-in-law, taking several swings at him and kicking, while her sister stood calmly next to her.

The speculation surrounding the private moment could fill a book (or three), and in response, the Knowles-Carter family addressed the rumors with a statement declaring their unity.

"(T)he most important thing is that our family has worked through it," the statement said of the "unfortunate incident."

"Jay and Solange each assume their share of responsibility for what has occurred. They both acknowledge their role in this private matter that has played out in the public. They both have apologized to each other and we have moved forward ... At the end of the day, families have problems and we're no different."

In the aftermath of the video, much of the gossip zeroed in on Knowles' relationship with her sister, as the curious public watched closely for signs of either sibling discord or solidarity.

Yet according to Knowles, she and her sister have held tight to the values that were instilled in them as kids, to love and protect one another through anything.

"We've always held each other down no matter what," Knowles tells Lucky magazine. "That's something I'm drilling into (my son) Julez now."