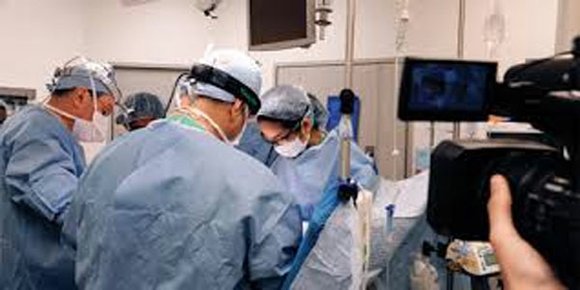 Some reality television shows want viewers to keep up with a certain family, which became famous because of an illicit videotape. While others in the world of reality TV encourage its audience to take a peek inside the lives of the so-called real housewives.

However fans of the ABC Television summer series, “NY Med,” are privy to one of the most compelling hours the small screen could possibly offer.

“It’s real life, there are definitely no retakes,” said Dr. Guy McKhann, a Baltimore native and neurosurgeon at New York Presbyterian/Columbia Medical Center. “You have no idea what the outcome will be for each patient, but you know that you have a job to do and you forget the cameras are there and that a microphone is on.”

The second season of “NY Med,” kicked off on Thursday, June 26, 2014 and the show’s producers said they’ve broadened their lens to tell a riveting tale of high stakes medicine in two vastly different communities.

“For the first time shooting this, it took a little while to get used to because in the emergency room you feel a little sheltered,” Dr. McKhann said. “You maybe are carrying on a conversation with a resident or with a patient’s family. One good thing I’d say about this is that it does give us a chance to look at the film and it forces us to see how we did with the conversation.”

In one scene, Dr. McKhann is shown operating on a young woman who has a large brain tumor. The woman remains awake during the procedure so that the surgical team can monitor her speech and motor skills as they remove the tumor.

Quickly, the drama begins to unfold where many viewers can relate to the anxiety and uncertainty that’s befallen the patient. Understanding that the operation is a virtual life and death situation, the young mother of two implores McKhann to, “Just get me back to my babies.”

Executive producer Terence Wrong said a medical crisis will bring most to the hospital at some point in their lives and the show offers a stark contrast between the patient populations in New York City and across the river in Newark, New Jersey.

Recalling the first season from 2012, Wrong said faithful viewers might remember the dynamic trio of nurses who delivered compassionate care and stern advice in equal measure. Debbie Yi, the ER resident who became a doctor after her sister fell in the subway and lost a leg, also returns to, “NY Med,” and each one of the characters from the first season face a gamut of personal crises that impact their jobs and their lives.

“I have a doctor who does a wide-awake brain surgery in this show, Guy McKhann,” Wrong says. “Well, he grew up at Hopkins. His dad was a Hopkins surgeon, and he is completely in the Hopkins mold. ... The Hopkins culture is so profound that it permeates everywhere you go in medicine.”

“There are lots of ups and downs, lots of emotions and lots of stress for everyone,” McKhann said. “Things don’t always go well, but a lot of people want to know what goes on in a hospital setting and I do about 100 brain surgeries a year and it allows people to see what’s interesting in medicine.”