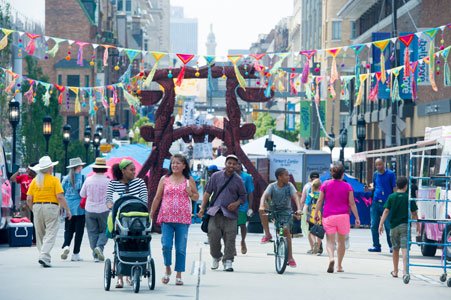 Artscape returns for the 33rd year Friday, July 18, Saturday, July 19 from 11 a.m. to 9 p.m. and Sunday, July 20 from 11 a.m. to 8 p.m. on Mount Royal Avenue and North Charles Street. Artscape invites festival-goers to “Join the Movement!” with an emphasis on dance and all things motion-related. Download the Artscape App! Powered by Kaiser Permanente, the app lets festival-goers plan their visit. (Photo: Edwin Remsberg)

The public is invited to the 33rd annual Artscape on Friday, July 18 and Saturday, July 19 from 11 a.m. to 9 p.m. and Sunday, July 20 from 11 a.m. to 8 p.m. on Mount Royal Avenue and North Charles Street. Artscape invites festival-goers to “Join the Movement!” with an emphasis on dance and all things motion-related including Silent! Disco in Pearlstone Park, Dance at The Lyric, kinetic contraptions along Mount Royal Avenue, “Ballroom Dancing in the Garden” on Charles Street and the NEW Aerial Arts Arena.

The 2014 festival is headlined by Sharon Jones & The Dap-Kings, Ozomatli, Galactic and Anthony Hamilton. America’s largest free arts festival features live music of various genres on three outdoor stages, a full schedule of theater, dance and opera performances, in addition to classical, a cappella and experimental music, street theater, fine art and crafts from more than 150 artisans in the Artists’ Market, world famous art cars, the Janet & Walter Sondheim Artscape Prize Semi-finalists Exhibition, film, children’s activities, exhibitors and an assortment of food and beverages. Artscape is presented by Mayor Stephanie Rawlings-Blake and produced by the Baltimore Office of Promotion & The Arts.

“Each July, Artscape continues Baltimore’s tradition of celebrating and supporting art & culture,” says Mayor Rawlings-Blake. “With this year’s ‘Join the Movement’ theme, I invite residents and visitors to take advantage of the festival’s free offerings by not only watching the performances and exhibitions, but by joining in the many interactive programs and visiting the many projects designed by artists.”

Festival-goers are encouraged to download the free Artscape Mobile App, powered by Kaiser Permanente, on their Apple and Android devices or visit www.artscape.org for the most up-to-date event information. Artscape lovers can also share their excitement at www.facebook.com/Artscape.Baltimore or be a part of the conversation by following @ArtscapeBmore on Twitter and Instagram, as well as using the hashtag #artscape2014.