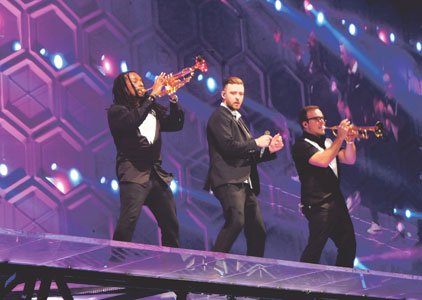 BALTIMORE — Summer is heating up in the city and serving Baltimoreans as much fun, entertainment and music as the city can handle. From local to internationally recognized artists, the city is getting its fair share of festivities and seasonal fun.

Experience World Tour.” What many city residents may not know is that one of Baltimore’s very own sons and renowned trumpeter Dontae Winslow shared the big stage with Timberlake as one of his touring band members. Winslow has been touring with Timberlake on his current tour.

Winslow is also touring personally with his own group “The Winslow Dynasty” to promote his latest album, “Enter The Dynasty.” Winslow was back in Baltimore in June with The Winslow Dynasty to perform in a concert as part of an intimate concert series entitled “Ear Candy.” The group will be performing along the East Coast, including shows in Philadelphia, New York and Washington, D.C.

Influenced by Ashford and Simpson, the Baltimore natives describe their sound as eclectic with tones of classical, jazz, rock and gospel.

The Winslows are certainly hometown favorites. Dontae and Mashica both studied under the tutelage of Dr. Nathan Carter— Mashica, a graduate of Morgan State University and the University of Maryland; and Dontae, a graduate of Johns Hopkins University. The two met in high school while attending The Baltimore School for the Arts and later became teachers in The Baltimore City Public School System.

However, their talent and what they consider their divine purpose, eventually led them to national and international performances with acclaimed artists such as Snoop Dogg, Queen Latifah, Jill Scott, more recently Justin Timberlake.

As independent artists the husband-wife team decided to create their own company and brand, LifeMUSIC, which allows them to not only create music but also impact the next generation of musicians.

The couple returned to Baltimore and established the mentoring and training program, “Music Motivating Minds.” The program provides Baltimore students, K-12, with master classes, lectures, concerts and various methods of training to groom the next generation of musically trained leaders.

Professionally trained at The Peabody Institute of The Johns Hopkins University, Dontae Winslow said, “It is important that we give back to our city the way our great mentors gave to us.”

Their return to the East Coast serves as a summer tour to promote their newest self-titled album, “Dontae Winslow & The Winslow Dynasty.”

The very talented group says they wanted to also return to their hometown to share love and hope with their friends, family and fans.

“We want people in our city to have faith as they love hard and dream big.”

For more information about The Winslow Dynasty and tour dates, visit: http://www.winslowdynasty.com/.