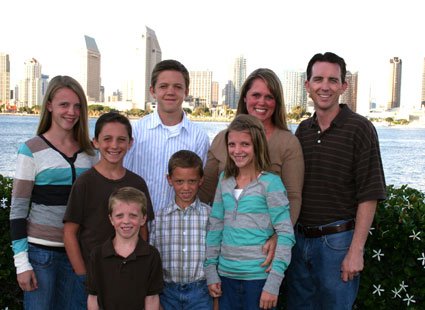 The Murset family is spending 20 days this summer traveling across the country in an RV and doing free chores for complete strangers. One of their stops was at Kathy Oliver's home in Elkridge, Maryland. Her 17-year-old son Bo Oliver has a rare bone cancer. The Mursets found the Oliver family through the Ulman Cancer Fund, which links families in need. (courtesy photo)

For Elkridge resident Kathy Oliver, every day chores such as pulling weeds in the backyard and raking the lawn are mere distractions nowadays. Her son, 17-year-old Bo Oliver, has Ewing’s sarcoma, a rare bone cancer and is going through treatment for a second time since the cancer returned earlier this year.

“When you’re dealing with something like this, you’re basically surviving,” Kathy Oliver said. “There are regular appointments, prescriptions, research and all of your energy is focused on doing what you can to help your child survive and things like yard work is no longer important.”

For Oliver, Gregg Murset his wife Kami and their six children ranging in age from seven to 16 are a lifesaver.

The family is spending 20 days this summer traveling across the country in an RV and doing free chores for complete strangers. The trip is an extension of an app Gregg Murset created called, “My Job Chart,” in which children get assigned chores and received points representing money when the chores are complete.

“My Job Chart” was born from necessity, Murset said.

“I’m a father of six who wanted his kids to know the meaning of work ethic and money management. I wanted to build a learning foundation through teachable moments and hands-on experience using modern technology,” he said. “The result has been the creation of a unique system that provides opportunities for kids to work, manage time and money, while practicing accountability, responsibility and problem solving. ‘My Job Chart’ also provides parents a perfect environment to have meaningful conversations about how to make smart money decisions and setting priorities.”

Despite the initial unwillingness of the children, the family hit the road on June 30 from their Phoenix, Arizona home. They have made stops in Albuquerque, Denver, Detroit and Richmond and Murset hopes to do chores for 25 families, one family in each city they stop by, in 20 days.

Gregg Mursets says he found the Oliver family through the Ulman Cancer Fund, which links families in need.

“The hour and a half we spent at the Oliver home was very enjoyable,” Murset said. “When a family is dealing with something like cancer, especially in Bo’s case where there is a recurrence and they thought they were in the clear, this means a lot to them.”

Murset says the Oliver family has a large backyard and he and his clan mowed the lawn and pulled weeds.

“It wasn’t a home makeover, but Kathy Oliver was very happy and my kids really liked the family,” he said.

Oliver says the 90 minutes the Murset’s spent felt like a lifetime. It proved quite the relief. “We are at the hospital all the time, and my dad’s at work, and I’m working, and we come home from the hospital and we see branches or whatever, and it’s kind of a hit to not be able to take care of your own yard,” she said. “But these people are coming to do that, and it’s pretty awesome.”

Murset said it has always been his goal to help those in need, particularly families who are battling cancer. Also, he said he wanted to educate his children on the fact that there are many great people in the world who are going through some struggles. And, he said, they could use a little bit of help.

“As we started fleshing out the tour, they really started to see the bigger picture,” Murset said. “They are really enjoying it now. Teenagers today only think about themselves. It has been an eye-opening experience. The world is bigger than just them.”

For the Oliver family, the Mursets have made the world an even better place.