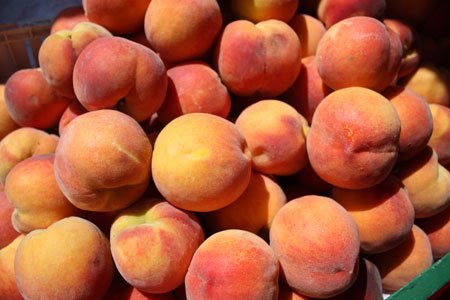 Wawona Packing Co. is voluntarily recalling peaches, nectarines, plums and pluots that were packed at its Cutler, California, warehouses between June 1 and July 12, 2014. CNN

Wawona Packing Co. is voluntarily recalling peaches, nectarines, plums and pluots that were packed at its Cutler, California, warehouses between June 1 and July 12, 2014. Wawona believes the products may be contaminated with Listeria monocytogenes.

Costco, Trader Joe's, Kroger and the Walmart Corp.— which operates Walmart and Sam's Club stores, have all posted notices about the fruit recall on their websites. So have grocery chains Ralphs and Food 4 Less. The recall is nationwide, according to the U.S. Food and Drug Administration.

Consumers should look for a sticker on their fruit that says "SWEET 2 EAT," according to the recall warnings.

Internal testing at Wawona revealed the potential Listeria contamination, the FDA says. The facility was shut down and sanitized; subsequent tests have been negative for the food-borne illness.

"We are aware of no illnesses related to the consumption of these products," Wawona President Brent Smittcamp said in a statement. "By taking the precautionary step of recalling product, we will minimize even the slightest risk to public health, and that is our priority."

Trader Joe's has urged customers not to eat any of these stone fruits— meaning fruits with large pits— and to return them to a nearby store for a full refund.

In addition, Wegmans Food Markets, Inc. has recalled several of its baked goods that contain fruit from Wawona Packing Co. This includes cakes, pies, tarts and other pastries. For a full list, see FDA.gov.

Listeria monocytogenes is a bacterium that can cause Listeriosis. The most common symptoms of Listeriosis are gastrointestinal issues (such as diarrhea), fever and muscle aches. Pregnant women, infants, older adults and people with a weakened immune system are particularly at risk for a more serious infection, according to the Centers for Disease Control and Prevention.

The CDC estimates about 1,600 illnesses and 260 deaths are caused by Listeriosis each year in the United States. Overall, outbreaks have been on the decline since 2001, but the largest in U.S. history occurred in 2011. Cantaloupes from a farm in Colorado sickened 147 people and killed nearly three-dozen.

The farmers responsible recently were sentenced to five years' probation, including six months of in-home detention.