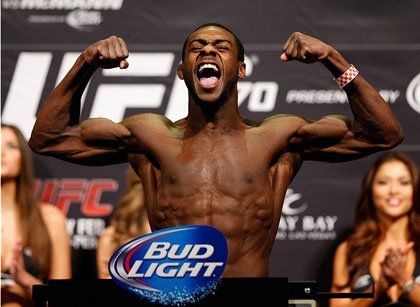 The long awaited bout between Donald Cerrone and Jim Miller took place Wednesday July 16, 2014 at the Revel Hotel & Casino in Atlantic City, New Jersey. Before the big match there were a few other matches with some talent to keep an eye on including Jessamyn Duke vs Leslie Smith. When Leslie Smith came to Baltimore in April, she came in as a substitute. You could tell this woman had something to prove and wasn’t going to lose without a fight.

This time around in Atlantic City, she got her chance to show what she was about when she won by TKO (Technical Knockout) in the first round. ““This is epic, this is one if the biggest wins of my entire career and I'm going to remember it and take it with me. I'm really glad that I was able to live up to the training and the expertise that my coaches have shared with me. They have all done so much and been such good examples. It was great to be able to honor them with a win.”

Hugo Vienna vs. Aljamain Sterling: The match started out slow in the first round as both fighters were trying to feel their way around the ring. The second round saw Sterling starting to take control of the fight and by the third round the referee called the fight with Sterling winning on a TKO. Sterling said after the match: “It felt awesome. My first fight I didn't really show what I could do. I put a lot of pressure on myself to do a lot of good things and I was able to do them. I showed that I'm ready for even bigger fights now and am looking forward to my next fight.” Sterling improves to 10-0.

Edson Barboza vs. Evan Dunham: Dunham proved to be no match for Barboza as he quickly rocked Dunham one minute 34 seconds into the fight. “Everybody knows my background is in Muay Thai. I saw his elbow a little bit, and just as my coach taught me, it was the opening I needed for the win. I'm feeling great. Thank God. I trained so hard for this fight and I can't wait to step into the cage again,” said Barboza.

For more information about the winners and losers of UFC Fight Night in Atlantic City, visit: http://www.ufc.com/event/ufc-fight-night-atlantic-city