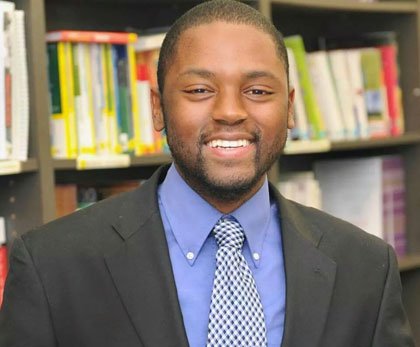 Upon meeting Verlando Brown for the first time, you would never guess this trim, self-confident graduate student received special education services in grade school to remediate stuttering. It is equally difficult to believe he once weighed 300 pounds, and suffered from low self-esteem when he was working on his undergraduate degree.

While his life has been filled with obstacles that could have held him back, Verlando has met and overcome these challenges, and more. The first person in his family to graduate college, he attended Booker T. Washington Middle School and Frederick Douglass High School, two of the city’s toughest, most dangerous public schools. After earning his undergraduate degree at Towson University, he is scheduled to complete his master’s program at the University of Baltimore in the fall of 2015.

Verlando born to and raised by a single mother in West Baltimore is a shining example of how parental-guidance, self-advocacy, tenacity and a personal commitment to excellence can produce a young man who represents hope for our troubled city.

His accomplishments speak directly to ways positive words and meaningful actions can help a child rise above systemic low expectations. From his earliest school days Verlando has been guided towards academic success by his mother’s steadfast belief that education matters. “I don’t want you to become like all the other guys on the corner just hanging out, selling drugs, dying young. I want you to get ahead in life, to be somebody.”

His mom, Catherine Young backed her words up with firm plans and measures designed to guide him away from the pitfalls that ensnare and diminish the potential of many black boys raised in West Baltimore. For example, aware that his stuttering would present a communication barrier for her bright young son, Catherine sought and secured an IEP (individual education plan.) He soon received the services needed to remediate his speech impairment.

As an undergraduate Verlando says being overweight had a direct impact on his self-esteem. In a remarkably candid conversation he revealed how self-doubt pushed him towards feelings of depression. “I was proud of my academic accomplishments, but still felt I wasn’t as good as the other students. I literally could feel the weight holding me back, keeping me from feeling good about myself.” Finally he decided to follow his mother’s example of solving problems by seeking remediation. Through a careful diet and exercise program he trimmed down and transformed his body into excellent, athletic condition.

In a recent conversation, Verlando raised and touched upon the very serious issue of depression among black male college students. Unfortunately, within the black community mental health issues affecting student performance in and outside the classroom does not receive the time and attention it deserves. I think it says a lot about this young man who is doing well, yet is concerned about problems that may prevent other black scholars from reaching their full academic potential. It is a topic that Education Matters intends to address in the fall.

In the meantime, in addition to pursuing his master’s degree Verlando was recently selected to be the Graduate Coordinator for the Office Student Activities and Orientation, in the Division of Student Affairs at MICA (Maryland Institute College of Art.) He is also excited about sharing his journey with a group of under-resourced youth as guest speaker at the Baltimore Urban Alliance. He sees this as a way to inspire young people facing some of the same challenges he has overcome.

Kudos to Verlando for his efforts and best wishes for continued success in the future. It is young people like him that I dedicate this column and pin my hopes for the future of Baltimore City.