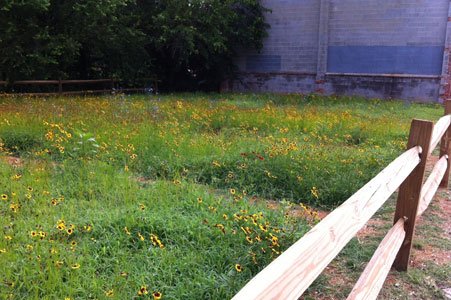 Maryland inmates are sprucing up and testing special wildflowers and grasses in eight vacant West Baltimore sites as part of a continuing beautification project with the University of Maryland Baltimore County (UMBC). (Courtesy photo)

TOWSON, Md. — Maryland inmates are sprucing up and testing special wildflowers and grasses in eight vacant West Baltimore sites as part of a continuing beautification project with the University of Maryland Baltimore County (UMBC).

The inmates cultivated the flower and grass seeds at the Metropolitan Transition Center in Baltimore, where they have toiled for months in two greenhouses, including one they built themselves, to determine if the vegetation will grow in urban soil. Participation in the project is part of the Department of Public Safety and Correctional Services’ (DPSCS) Public Safety Works (PSW) program, a restorative justice effort, which allows inmates to give back to the communities they have harmed.

“The pride that this project has instilled in the inmates will aid them tremendously in their success upon re-entry into society,” said Felicia Hinton, director of corrections for the DPSCS Central Region.

DPSCS has been a national leader in inmate environmental projects ranging from restoring Chesapeake Bay grasses to planting one million trees throughout the state.

The goal of this project is to transform unused vacant lots into low-maintenance, attractive green spaces and bring natural beauty into the neighborhood while positively impacting the environment, said Christopher Swan, a UMBC associate professor of geography and environmental science who is leading the project.

“A study of this size could not be done without the massive amounts of human resources of the inmates,” Swan said. “They’ve helped project this forward.”

Inmates are glad to give back to the community, said Nathan Boone, an inmate who worked on the project.

“It’s an amazing feeling,” Boone said. “You get to learn a trade that you can take out to the street and you can beautify your own neighborhood.”