Can the President really make progress for boys and men of color? 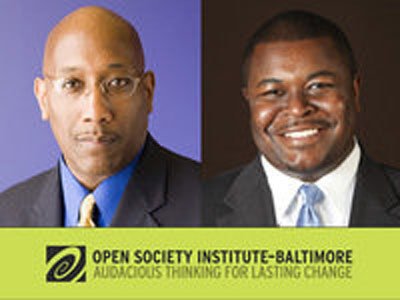 Open Society Foundations' Senior Advisor for Special Projects Damon Hewitt and Joe Jones, CEO of the Center for Urban Families, will discuss the merits and feasibility of President Obama's "My Brother's Keeper" initiative on Tuesday, June 10, 2014 at 7 p.m. at Enoch Pratt Free Library in the Wheeler Auditorium at 400 Cathedral Street in Baltimore. (Courtesy Photo)

The OSI-Baltimore Series "Talking About Race" brings together two experts to discuss what President Obama's "My Brother's Keeper" initiative— and the community— can really do to help young African-American and Latino men succeed.

Open Society Foundations' Senior Advisor for Special Projects Damon Hewitt and Joe Jones, CEO of the Center for Urban Families, will discuss the merits and feasibility of President Obama's "My Brother's Keeper" initiative, created to advance the achievement of boys and young men of color on Tuesday, June 10, 2014 at 7 p.m. at Enoch Pratt Free Library in the Wheeler Auditorium at 400 Cathedral Street in Baltimore.

The statistics are startling! Across the country, boys and young men of color are disproportionately at risk. They're more likely than their white peers to be unable to read proficiently, to drop out of school, to become involved in the criminal justice system and even to be killed.

In fact, according to a White House website, African American and Hispanic young men are more than six times as likely to be victims of murder than their white peers and account for almost half of the country's murder victims each year.

With so much stacked against them, what can a presidential initiative do to really change the lives of the nation's boys and young men of color?

As part of its well-attended, "Talking About Race" series, OSI-Baltimore will unpack President Obama's "My Brother's Keeper," an initiative created this spring to advance the achievement of boys and young men of color by bringing together government, business and philanthropic leaders to boost opportunities for that underserved population.

The initiative is not without critics.

Some worry that singling out black and Latino males, further brands them as victims. Others predict the effort to encourage businesses, foundations and community groups to work together to keep young men in school, out of the criminal-justice system and thriving will simply fail in the face of the magnitude and deep-seated roots of the problem.

In a rich and provocative dialogue, the forum's featured speakers will consider these and other points of view and discuss ways in which the initiative can— and should— be successful.

Joe Jones, president and founder of the Center for Urban Families, will discuss the innovations that already are beginning to create change in Baltimore, thanks to the commitment of national and local organizations such as Open Society Foundations and the Annie E. Casey Foundation. And Open Society Foundations' Senior Advisor for Special Projects Damon Hewitt will share what's happening across the country and why there's reason for optimism.

Jones' work in Baltimore championing responsible fatherhood as the key element of strong, economically secure urban families has been recognized both locally and nationally. He served on President Obama's Taskforce on Fatherhood and Healthy Families, and last spring, the President visited CFUF as a part of his Jobs and Opportunity tour.

In his role at the Open Society Foundations, Hewitt guides the organization's efforts on school discipline policies and improving the life outcomes of boys and men of color. He also is co-author of "The School-to-Prison Pipeline: Structuring Legal Reform" (NYU Press 2010).

The free and open-to-the-public forum is a part of OSI-Baltimore's "Talking About Race" series, co-sponsored by the Enoch Pratt Free Library. The series has been addressing race from different perspectives and exploring why it is important to discuss the topic openly and intelligently.