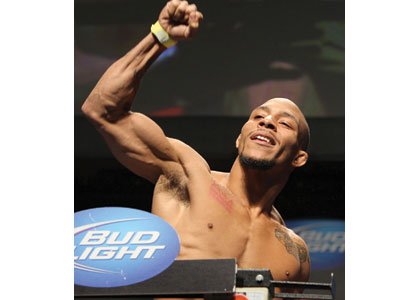 Mixed Martial Arts is a very rough sport. It’s not something many people would choose as occupation. In the case of DC native, Mike Easton, the sport is something he has grown up with.

“I am very blessed to have a family who is still together, who also practice the sport, along with my sister who competes in martial arts” says Easton.

Growing up in the 80s and 90s, with a light complexion and short stature, you either had to be funny or know how to fight because in the DC area, you were going to be tested. “I had to prove myself on daily basis. You had to be tough. My dad showed me how to protect myself,” confesses Easton.

He began boxing at age four and Tae Kwon Do at age seven— he holds a black belt. When he was seventeen he met trainer Master Lloyd Irvin, and even though it would be over a decade before Ultimate Fighting Championship (UFC) introduced the bantamweight division, Easton told Master Lloyd he wanted to be a UFC champion. While studying his craft, he obtained a black belt in both Thai Jitsu and Brazilian Jiu Jitsu and became an instructor.

“I think martial arts are great for kids in the community. It will keep them out of trouble, help them to stay focused, and help them to set goals and be productive,” Easton said.

On Saturday, June 14, 2014, Easton is set to take on challenger Yves Jabouin. Easton is looking to get back on track after a tough three losses to some top ranked opponents. “There will be people who say I don’t deserve to be fighting for a championship in the near future, but if you have looked at the fights that I have had they have been top caliber fights. My losses have been very close fight. I am looking forward to fighting Yves in his hometown and letting the world see what I can do. I am doing this for my hometown of DC and I want to represent for all the DMV. This fight is for the hometown.”

For more information about UFC174 and to follow Mike Easton, visit: www.ufc.com .