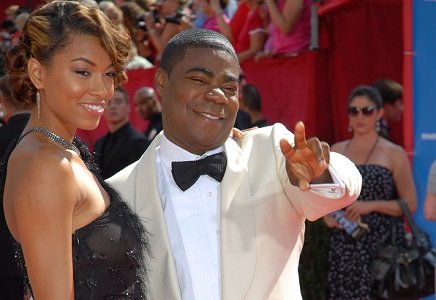 (CNN) — A truck driver charged in a weekend crash that killed a man and injured comedian Tracy Morgan and others in New Jersey was awake for more than 24 consecutive hours before the incident, a criminal complaint filed in the case says.

Kevin Roper, 35, is charged with vehicular homicide and assault by auto in the Saturday morning crash on the New Jersey Turnpike.

A Walmart spokeswoman issued a news release that said it was investigating the case.

"With regards to news reports that suggest Mr. Roper was working for 24 hours, it is our belief that Mr. Roper was operating within the federal hours of service regulations," Brooke Buchanan said in a written statement, referring to limits of 11 hours driving in a 14-hour period followed by 10 hours of rest.

The wreck took place about 1 a.m. Saturday when the limo bus Morgan was in was hit by a tractor-trailer on the New Jersey Turnpike, police said.

McNair's sister, Valerie Daniel, said he will be buried in a private ceremony on Thursday in Peekskill, New York.

Comedians Ardie Fuqua and Harris Stanton were among the injured, as was a man named Jeffrey Millea.

Morgan's publicist said Monday afternoon he is still in critical but stable condition.

His fiancee, Megan Wollover, is with him, publicist Lewis Kay said.

Kay said Morgan underwent surgery on his leg on Sunday.

"We expect him to remain in the hospital for several weeks," he said.

The truck driver charged in the crash turned himself in to police, and was released on $50,000 bail Saturday night.

Roper was a driver for Walmart.

"This is a tragedy, and we are profoundly sorry that one of our trucks was involved," Bill Simon, president and CEO of Walmart U.S., said in a statement.

"The facts are continuing to unfold. If it's determined that our truck caused the accident, Walmart will take full responsibility."

"The driver of the tractor-trailer failed to observe slow-moving traffic ahead," Williams said. "At the last minute, he swerved to try and avoid the Mercedes limo bus but struck it from behind, forcing the limo to rotate and overturn."

Four other vehicles were involved in the crash, the prosecutor's office said, but no one in those vehicles was injured.

Williams said he does not believe alcohol played a role in the crash, but that is under investigation.

"All I know is I saw traffic ... and I stopped ... and I was upside down and in the vehicle," limo driver Tyrone Gale told WCAU.