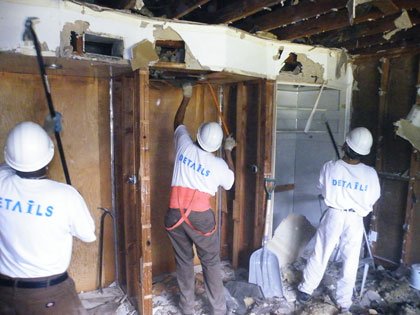 Details, a division of the Baltimore-based workforce development nonprofit Humanim was awarded a contract to deconstruct vacant houses and sell the harvested materials.

For the many blighted and condemned houses in Baltimore, the wrecking ball has always been the sole answer to disguise or put an end to the problem.

However, city officials and a local nonprofit organization realized the need for a better approach, one that could even help reduce unemployment numbers in Charm City, particularly in the African American community.

“This is a win-win, because many of the houses that are being taken down actually have some value in the bricks and lumber they’re made out of and by [deconstruction] we are actually capturing resources and creating employment,” said Jeff Carroll, director of Details, a division of the Baltimore-based workforce development nonprofit Humanim, which has received contracts to deconstruct houses in Baltimore, Virginia, Delaware and in Washington, D.C.

“This pilot program will not only put Baltimore at the forefront of environmentally friendly demolition practices, but also create job training opportunities for city residents that will help them attain better, higher paying jobs,” Rawlings-Blake said in a news release. “I’m proud of the Baltimore Housing for creating such an innovative opportunity.”

Cindy Plavier-Truitt, the chief development officer at Humanim, Inc., says the program represents a solution to two pressing issues facing Baltimore, finding new and creative methods to address the costs associated with blight and discerning ways to put individuals from the inner city back to work.

“We’ve been around 42 years but, in 2009, as the Great Recession got worse and unemployment soared, we were thinking that there’s got to be a different way to make a dent in the unemployment rate,” said Plavier-Truitt. “Deconstruction is certainly a job creator so we decided to focus on the residential market and proceed.”

The company has already hired 40 employees who are mostly black men reentering the workforce after lengthy periods of unemployment. The men also are eligible for health and life insurance and they can qualify for promotions, according to Plavier-Truitt.

The company provides a job readiness program where participants learn various skills, are trained in conflict and money management skills and are provided various tools for success.

In addition to their salaries, employees receive travel and other expenses associated with the deconstruction job they’re assigned.

“Deconstruction creates six to seven jobs for each house so, when you do the math, we can become a huge job creator,” Plavier-Truitt said.

The program was born from a visionary project that Humanim officials and its staff undertook in East Baltimore, one of the more impoverished areas of the city.

With an initial target of 50 structures, officials say that if the strategy proves effective at meeting environmental and job creation goals while delivering cost efficient demolition services to the city, the program could be expanded.

“Saving the environment, while creating jobs skills for residents, all while removing blight to make our communities safer is the perfect recipe for success,” said Housing Commissioner Paul T. Graziano.

The process of deconstruction involves most of the work being done by hand as individuals strip the house, taking it apart delicately.

In removing property in that manner, Humanim can pay for labor and other expenses by selling the salvaged materials such as bricks and lumber, which cannot be accomplished in a typical demolition.

When deconstruction occurs, workers help protect the environment because they can preserve materials that can be reused elsewhere including the reselling of valuable bricks and other materials. Humanim also donates fixtures found in condemned houses to places such as Habitat for Humanity and Build it Green, Plavier-Truitt says.

“We believe there is a market for the bricks and the lumber and that helps with costs,” she said. “We also believe that this is a job creator and that’s a big part of our mission.”