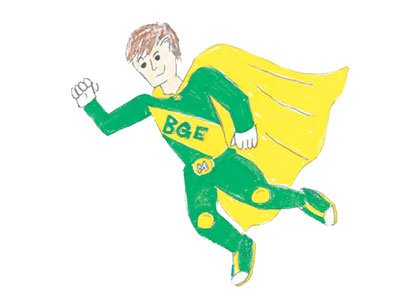 The winning depiction from The School of the Incarnation in Gambrills, Maryland, received the $10,000 top prize. (Courtesy Photo)

BALTIMORE — BGE unveiled its new natural gas safety hero, Captain Mercaptan, based on designs submitted by area elementary students during the BGE Natural Gas Safety Hero Challenge. The winning depiction was from The School of the Incarnation in Gambrills, Maryland, which received the $10,000 top prize to use for a school enrichment project. Overall, $35,000 is being awarded by BGE to area schools through the contest. Captain Mercaptan takes his name from “mercaptan,” the safety additive that BGE and other gas utilities add to normally odorless natural gas to give it a distinctive, easy-to-detect smell.

“Everyone at BGE extends our thanks to the many students across central Maryland who demonstrated their creativity and understanding of natural gas safety topics during the Captain Mercaptan contest,” said Robert Biagiotti, vice president of Gas Distribution, BGE. “Helping customers, especially the children in our service area, understand how to be safe around gas and electricity is our top priority. We’re happy to have a new gas safety hero, Captain Mercaptan, to help us in that mission.”

Area schools submitted 66 drawings and descriptions of Captain Mercaptan in April before public voting and an expert panel of judges selected the winners. More than 36,000 votes were cast online at bgegashero.com. In addition to the first-place winning prize, a top entry was chosen for each grade level, kindergarten through fifth grade. The winning schools were:

Winning schools will use the awards for school enrichment projects. The School of the Incarnation, which took the top prize for an entry by a fifth grade class, also was awarded the top prize for the kindergarten grade level for a total of $15,000. The school plans to use the funds to help with an expansion to its music program to benefit 800 students. Specifically, they will create a new music room that would enhance their performing arts program by providing rehearsal space for school choruses, the instrumental band program, guitar club and drama program.

“With Archbishop William Lori, I thank BGE for their continued commitment to educate children on energy safety, efficiency and conservation,” said Dr. Barbara McGraw Edmondson, Superintendent of Catholic Schools for the Archdiocese of Baltimore. “Through these initiatives, students are creatively engaged in learning while our schools benefit from additional funding to create and innovate our academic programs. The new music room at School of the Incarnation, made possible by this award, will enrich the music program and expand the space for the school’s entire performing arts program. We also thank the students and faculty at School of the Incarnation and also St. John Catholic School in Westminster for bringing such enthusiasm and creativity to this lesson on natural gas safety.”