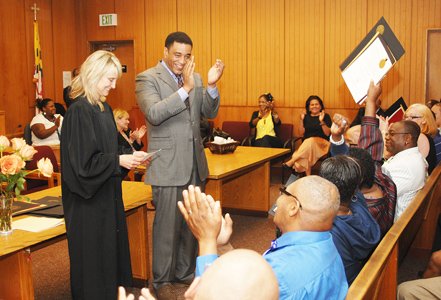 This is Part I of a Two-Part Series on Baltimore City’s District Drug Treatment Court.

Sitting before the judge in Courtroom 1 at the Borgerding District Court Building located on Wabash Avenue, LaVeie Jones waited to hear her name called. From the age of 22, Jones, now 43, had used drugs. However, on Monday, June 16, 2014, her name was not called for sentencing, but to receive her Certificate of Recognition for successfully graduating from the Baltimore City District Court Drug Treatment Court.

“What I am feeling today is that I succeeded at something, even though it was hard,” said Jones. “I didn’t think I would be able to do it by being home and going past the areas where I used to get high and live. I prayed to God to guide me every day and keep me safe in his arms. I asked Him to guide me in the right direction when He saw me going in the wrong direction.”

She added, “I made it. I finally feel like I am doing something good and positive with myself. My kids and grandkids can now see and feel the love coming from me, because now it’s not ‘highed up’ It’s genuine and real.”

Jones was among the graduates who completed the Baltimore City District Court Drug Treatment Court. The rigorous drug treatment court program combines judicial oversight with intensive treatment and supervision. Family members and friends proudly watched the graduates receive their diplomas inside of the packed courtroom.

“This graduation proves that Drug Court works,” said Lennix. “When I come to these events, I hear the stories about families reunited, lives restored and lives regained. It is extremely encouraging, and shows that love, faith, and the desire of people does work. We need more of this.”

He added, “It shouldn’t be a struggle to get funding for these courts. They save lives and money and help communities. I am always honored and obliged to participate in events like this.”

Lennix, is an All Rise Ambassador for the National Association of Drug Court Professionals (NADCP), and is currently starring in the TV show “The Blacklist,” on NBC. He also starred in the Oscar-winning film “Ray" and most recently, “Man of Steel.”

Maryland’s first drug treatment courts began in 1994 in Baltimore City District Court and Circuit Court. Since then, the program has expanded to include more than 40 drug treatment and problem-solving courts throughout the state.