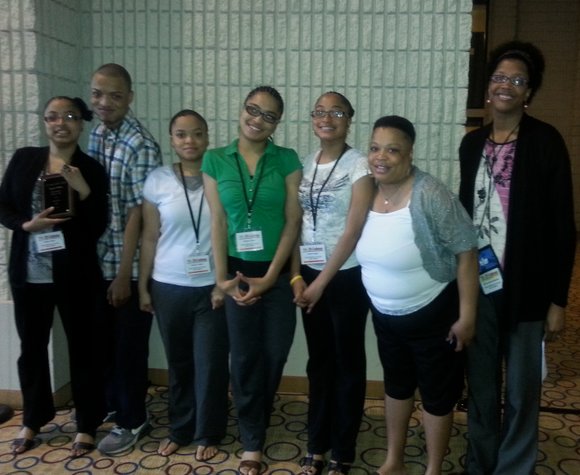 BALTIMORE — The South Baltimore Learning Center (SBLC) was recognized by the Maryland Association of Adult, Community and Continuing Education (MAACCE) for “outstanding contributions and achievements in the field of adult education.”

MAACCE annually presents multiple student awards: this year it had the distinction of presenting one of the awards to multiple siblings.

While attending school, the Toppin siblings – Hydeia (now age 20); Chyanne, Kyetra and Felipe (19), and Shaquan (17) – of Brooklyn, Md. were repeatedly bullied. Their mom, Dionne, subsequently switched them to homeschooling for four years.

Wanting them to have more structure, she enrolled them in SBLC in 2012. Since then, the siblings have been “diligent learners whose confidence has grown and they are eager to learn new things each week,” according to Kirstyn Mayden, SBLC’s intake & assessment specialist, who nominated them for the award.

As some of SBLC’s youngest students, the siblings attend classes on Saturdays, from 9 a.m. to 4 p.m. Shaquan is at the Adult Basic Education level; the triplets have moved to the Pre-GED level, and Hydeia has moved to the GED level.

Until a recent illness, they had maintained perfect attendance. “Even now, their one absence has not affected their demonstrated dedication to their goal of receiving their high school diploma,” Mayden added.

Enthusiastic to show their support for SBLC, three of the Toppin sisters volunteered to be greeters at SBLC’s 2014 fundraising gala – despite the fact it was starting just two hours after their day of classes was ending.

In reference to winning the MAACCE award, Hydeia said, “It was great to be acknowledged for getting our education.”

She wants to volunteer at a library in the near future; after earning her diploma, she plans to become a writer and attend culinary school.

Her siblings’ future career goals are as follows: Felipe wants to go into music, Chyanne wants to be a dancer and Kyetra wants to be a fashion designer. Shaquan is undecided at this time.

Andrew LaFlam, a clinical research coordinator at Johns Hopkins, wanted to get involved with his neighborhood and further develop his teaching and tutoring skills.

With this in mind, he began volunteering with SBLC in Fall 2011. Since then, the Federal Hill resident has dedicated a portion of his Saturdays to tutoring SBLC learners in math.

In Fall 2013, LaFlam extended his tutoring to include computer skills. Manning the computer lab, he has set up exercises that allow learners to practice some the skills needed for the new GED test and save the work to an instructor folder.

“The most rewarding thing about working at SBLC is witnessing transformations as students grasp new or forgotten concepts and become confident answering questions that are no longer intimidating,” said LaFlam, who is now age 26.

He added, “Being selected for the MAACCE volunteer award was an unexpected honor, but I wouldn’t even be in the running if it weren’t for the dedicated staff and students of the SBLC that allow me to supplement their work in the classroom every week!”