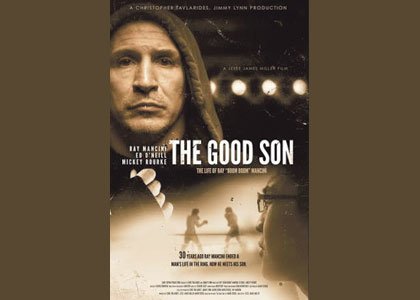 One of the best lightweight fighters, Ray “Boom-Boom” Mancini was one of the most respected boxers in history. A single tragic moment changed his story.

The documentary, “The Good Son, The Life of Ray “Boom-Boom” Mancini,” is one of the best real life sports films produced in very long time. The life of Mancini is not just shared from his viewpoint but from those close to him like Actor Ed O’Neil (Modern Family), Actor Mickey Rourke (Sin City), sports icon Sugar Ray Leonard, family and others.

“The Good Son, The Life of Ray ‘Boom-Boom’ Mancini,” shares behind-the-scenes knowledge of what and who shaped the life of Ray Mancini. When he won he dedicated his victory to his idol - his dad. The story also relates the tragedy of losing his brother and one of the most regretful live sporting events in television history.

On November 13, 1982 from Caesars Palace in Las Vegas Mancini fought Deuk Koo Kim for the World Boxing Association lightweight championship. What happened in the 14th round forever changed what would have been one of the best matches in WBA history. Kim was knocked out in the 14th round and never recovered. The film takes a look at the other side of Mancini’s life after that fight.

The film also explores the perspectives of Kim’s fiancee, Young-Mi, who was pregnant at the time and her son Jiwan, who never had a chance to meet his dad. The last 13 minutes of the film show the Mancinis and Kims making peace.. As the film states, even Sylvester Stallone could not write a better story then this. If you love real sports stories, then this is a something to watch. For further information, visit www.snagfilms.com .