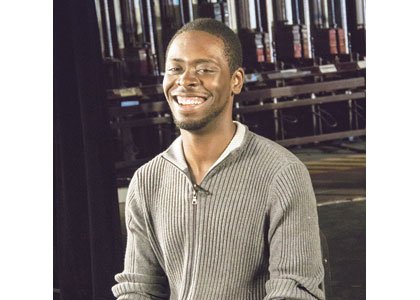 “The Nature of Man,” Hunter’s first play, is about the nature and mysteries of the heart. “The inner depths of the human heart overflow with darkness—but amidst these shadows, light can emerge. Today, we see, men are the homes they create for themselves and for each other,” Hunter writes in describing his work.

Hunter has performed and directed in numerous theatrical productions on CSM stages and volunteered his time to perform a short play on end-of-life issues for the 2013 Southern Maryland Hospice and Palliative Care Conference. He was chosen to attend the Kennedy Center American College Theatre Festival and was invited to audition for professional productions at the Southeastern Theater Conference. He is working as a stage manager for the 2014 Capital Fringe Festival, July 10-27.

At the 2013 College of Southern Maryland Foundation Scholarship Reception, Hunter, who received the Jerome A. Zanelotti, Sr. Memorial Scholarship, thanked donors for their generosity, saying “This scholarship tells me that you have faith in me as a student and as an actor. The best way to thank you for this scholarship is to show you that I am indeed worthy of it—which is exactly what I plan to do.”

The Watermelon Festival is the brainchild of Lisa Gregory the founder of Watermelon Inc., a nonprofit organization dedicated to the performing arts and to providing a nurturing and educational environment for original works. In the past four years, Gregory has focused on original works written by local artists and was the founder, artistic director and producer of Southern Maryland Originals, a production of the Performance Arts Club at CSM.