The rise of the civil rights museum 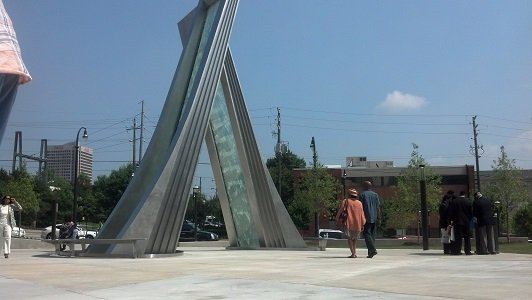 While architect Philip Freelon imagined designs for Atlanta's new National Center for Civil and Human Rights, he did the usual research into the past, scanning images of the civil rights marches and protests it would surely address.

Around the same time, he couldn't help but notice the front pages of modern newspapers that showed protesters around the world resolutely fighting their own battles. They were in different times, different worlds, but always, he saw the same image: People united, their arms interlocked or fingers woven together.

The gestures became the foundation for the design his team created, one that's visible today as the new museum opens in downtown Atlanta. Even after the recession edited the grand space to less than half the size originally proposed, the symbol endured. The building evokes two linked hands; its exterior walls feature a mix of earthy shades that suggest different races coming together. Inside, exhibits in the nearly 43,000-square-foot museum link the historic stories of the American civil rights movement and modern human rights struggles around the world.

The Atlanta center is one of several museums tied to civil rights recently opened or in the works. Around the country, they serve as memorials, meeting spaces, tourist attractions and time capsules, all trying to reveal their stake in history while drawing a young, tech-savvy audience.

They aren't just places to preserve history or tell the story of a single race, said Ford Bell, president of the American Alliance of Museums. Museums and libraries have long been places where communities explore curiosities and conversations of the moment, he said; it's why the United States saw a wave of natural history museums in the early 20th century, then science and technology centers and more recently, children's museums.

The rise of high-profile civil rights museums comes as communities recognize old wounds that need to heal and fresh cuts that require care, he said.

"Museums are the way that we often address important issues in our society, where we talk about them together," Bell said. "We as a society are still wrestling with issues related to human rights and civil rights, and a painful history."

'Stories are the most powerful tools'

Work on a civil rights museum in Atlanta began more than 10 years ago, when former United Nations Ambassador Andrew Young and civil rights activist Evelyn Lowery approached then-Mayor Shirley Franklin with the idea. The city was already home to memorials and historic sites honoring Atlanta native Martin Luther King, Jr., but they intended this space to go beyond the King legacy, or even civil rights history.

"It became really clear that they believed ... it was important to connect it to the current issues of the world and the United States," said Franklin, the board chairwoman of the National Center for Civil and Human Rights.