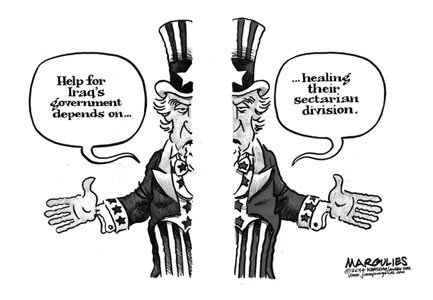 Iraq— now we know where hell is! Hell is supposed to be a place of torment reserved for some people after death. Unfortunately, too many have ended up there before they died. Is there no end to the turmoil in Iraq and Afghanistan? We will never see peace and quiet in either of these two countries. Hell never ends.

The religious factions of these countries hate each other. They want to kill each other. These factions are crazy. America is killing itself and our troops trying to fix crazy religious people. The only thing worse than a crazy person is a religious crazy person because they invoke the name of God or Allah or somebody during every crucifixion or beheading they perform. As they torture, murder and rape they move on in the name of their religion.

Some Americans thought we were finished in Iraq. When it comes to Iraq or the Middle East there is never a period but always a comma. Craziness does not end but only grows.

The only way to have some civility in Iraq or Afghanistan is to station 30,000 soldiers in five or six bases throughout each country. We can be assured if we do there will never be a time that our soldiers will not be in danger of ambush, bombs or the native soldiers turning on us as has happened numerous times. I think this is a bad idea.

Most Americans did not want us to go to Iraq or Afghanistan but we did. Over four thousand troops have died fighting the Iraqi cause. Where did all of that death get us? What do Iraq or America have to show for it?

The same scenario will happen in Afghanistan. Thugs sometimes called the Taliban

will band together to steal, kill and retake any part of the country that surrenders to them as played out in Iraq recently.

There is no ending to this boiling pot of the world. Turbulence in the Middle East will never stop. In recent months we could have justified sending troops to Syria as well and then we could be in three countries. How thin can we spread our soldiers, as well as stretch our American dollars?

Hell is a hot place and we will never extinguish the fire.