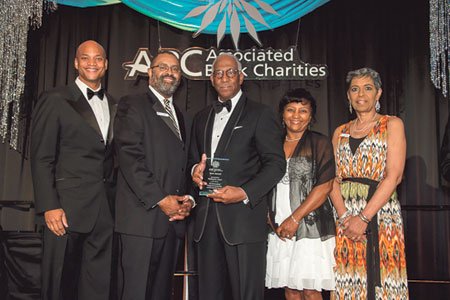 Michael E. Cryor, Chair of the University of Maryland School of Medicine (UM SOM) Board of Visitors, accepts his Icon Award during the Associated Black Charities 2014 Annual Gala in Baltimore. As well as being the Chair of the Board of Visitors for UM SOM, Mr. Cryor is also President of The Cryor Group, LLC. (Left to right) Honorary ABC Gala Co-chairman Wes Moore; ABC Board Chair Boyer Freeman; Michael Cryor; and ABC Board members Chineta Davis and Karen Banfield Evans. (Courtesy photo)

The Associated Black Charities (ABC) honored Michael E. Cryor, Chair of the University of Maryland School of Medicine (UM SOM) Board of Visitors and President of The Cryor Group, LLC, with an Icon Award during its ABC2014 Annual Gala in Baltimore.

Cryor is the founder and president of The Cryor Group, a strategic communications firm in Baltimore. He has more than 30 years of strategic communications experience, serving as an advisor to some of the nation’s leading corporations and nonprofits specializing in urban policy, health care, and technology-based initiatives. He has a long, distinguished public service and corporate career in the City of Baltimore and throughout the state of Maryland.

“We are pleased that the Associated Black Charities has recognized Michael E. Cryor for this high honor,” said Dean E. Albert Reece, M.D., Ph.D., M.B.A., Vice President for Medical Affairs at the University of Maryland and the John Z. and Akiko K. Bowers Distinguished Professor and Dean of the School of Medicine. “Michael’s unique ability to join the powerful forces of the private and public sectors has greatly enhanced the School of Medicine and other great institutions in so many meaningful ways. He is truly one of the community’s greatest assets.”

Cryor’s impact is exemplified by his commitment to improving lives of Baltimore’s citizens.

When Gov. Martin O’Malley was Baltimore’s mayor, he asked Mr. Cryor to lead a public affairs campaign to stop the increase in crime and addiction in Baltimore City. The seminal “Believe Campaign” was a huge success with a compelling message that appealed to Baltimoreans. It ran for years— instead of its intended weeks— and was recognized nationally and internationally.

Cryor currently chairs the Board of Visitors at UM SOM, and in 2007, received SOM’s distinguished Gold Medal for his exemplary service at the school. He also has won the Thurgood Marshall College Fund’s Award of Excellence. In May of this year, he was presented an honorary Doctorate of Public Service from the University of Maryland, Baltimore. He also holds an Honorary Doctorates from Montclair State Univeristy and Morgan State University.

At the ABC2014 gala on Saturday, June 21, 2014, Cryor was honored alongside Calvin Butler, Esq., CEO of Baltimore Gas & Electric Company; Thomas LaVeist, Ph.D., Director of the Hopkins Center for Health Disparities Solutions at the Johns Hopkins University; and Angela Celeston, Managing Director of Human Resources at OneMain Financial, a Division of Citi. Each of this year’s Icon winners demonstrated a proven track record of leadership within the business sector.

“The Associated Black Charities Annual Gala and Awards is one of the most prestigious recognition programs for African American corporate leaders. It is a tremendous honor to receive the Icon Award for leadership in the business sector,” said Cryor. “This award demonstrates my commitment to serving the City of Baltimore, the State of Maryland, and the larger community beyond.”