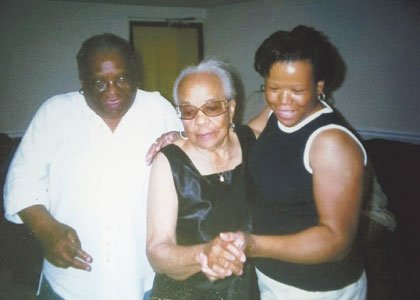 Verna White (center) with her daughter Ginger (left) and her granddaughter Denise. Verna passed away on Monday, June 9, 2014 at the age of 96. (Courtesy photo)

For nearly 75 years, my mother, Verna White had a profound effect on my life. She was my first teacher and the one person I've known longer than anyone else in the world. She was strong, independent and feisty.

A strict disciplinarian, she brooked no foolishness— from me, my siblings or anyone else. She was short, not even five feet tall. I remember her green eyes, red hair and freckles. Weighing in at 95 pounds, Verna "walked softly and carried a big stick."

The only child of Milton and Corinne Johnson, she was born in Asbury Park, New Jersey. College-educated, she was the smartest person I knew. She could answer any question and solve any problem. She was the quintessential parent.

My siblings and I (there were six of us) all understood exactly what she expected of us and knew that she always found out any infraction. We couldn't understand how she knew and she never told us. It didn't matter. We got punished anyway. Even if only one of us got in trouble, all of us paid.

She instilled in us a love of the English language and taught us to read at an early age. We had piano lessons, ballet lessons; she insisted on library cards even before we started school. We knew how to spell and write our names; we memorized our addresses and could count and identify colors before Kindergarten. There was no such thing, as “I can’t do it.”

She would say, “A bird that can sing but won’t sing must be made to sing.” She never saw us as less than great children.

Although we grew up during segregation, it didn’t bother us. We had everything we needed and if we didn’t, it was nothing for our parents to drive to New York to buy it. My parents both worked full-time for the federal government— even during segregation. Our mom was a nurse, who worked at several military hospitals before settling down at Social Security until she retired. Our dad worked as an Army vehicles mechanic at Edgewood Arsenal in Harford County. This was right after WWII.

There were shelves and shelves of books. My mother hated our music and constantly yelled at us to "turn that mess down or I'll turn it off!!"

She never considered that we would suffer domestic violence; some of us did. She urged us to control our own lives, even if it meant doing it alone and we did.

For 96 years, she had my back. In remembering, I didn't think so. It wasn't until she was in her 80s that I realized it. I will admit that 85 percent of who I am today is because of her. I'm taking credit for the other 15 percent.