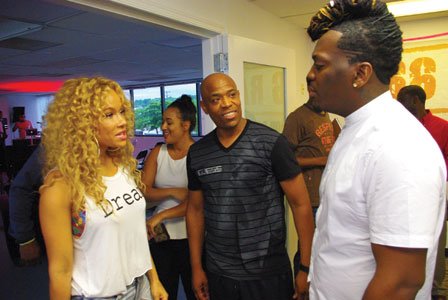 Baltimore native and 25-year record label executive veteran, Frank E. Johnson, formerly of Def Jam and Atlantic Records has returned home with a goal in mind— to reach Baltimore artists and provide a new generation with access to platforms to showcase their talent to the city, the world, and over 2.4 million annual listeners of WPB Networks Radio.

On Thursday, June 12, 2014, Johnson also owner of WPB Networks hosted, Writer’s Rap, a showcase held to provide local and national recording artists with the platform to be heard by media partners. Baltimore’s own Brave Williams was the featured artist for the most recent Writer’s Rap event.

Brave Williams, an independent national recording artist formerly of the R&B girl group, RichGirls, was on hand to connect with Baltimore and performed her new single, Oooh (Luv Ya), which is currently being played by many local radio stations including 92Q. Williams is a product of Baltimore and wants to connect with home as she continues to tour and promote her new single for her forthcoming EP titled, “Fearless.”

“I am overwhelmed by the support and how the city has backed me and are here celebrating my new EP as well as helping to bring national spotlight back to Baltimore artists.”

The Writer’s Rap session was hosted by Kelson the Urban Informer and included a Q&A session, as well as additional samplings from Brave’s upcoming album. Erica Kane, DJ J Claxton, and Civ Jones were some of the radio personalities on hand in support of Brave and the Writer’s Rap event.

“This is a space where we want artists to be heard and to be able to help uplift the artists, I want to bring that iconic feel we once had back to Baltimore’ [music community]” said Frank Johnson. The Writer’s Rap, Youth Bmore Summer Block Party, WPB Networks are all efforts of Johnson and his team to really give back to the Baltimore community and to meet the needs of the underserved.

Johnson says he is dedicated to giving back and bringing Baltimore much-needed hope through music. He attributes much of why he does what he does to advice he received from his friend and mentor, Kevin Liles, another Baltimore native who is a veteran music executive.

“He told me to put on and support our city,” Johnson said about Liles. Future efforts to showcase Baltimore’s talented pool of artists and the emerging music scene are at the forefront of Frank Johnson’s agenda for his beloved city.

For more information on future WPB Networks’ and happenings, log onto www.wpbradio.com or nikawatkins@gmail.com.