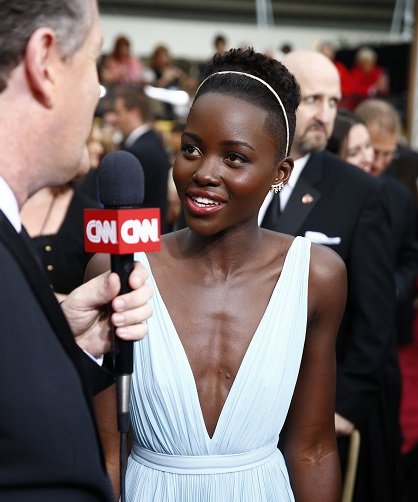 Lupita Nyong'o on the red carpet before the 2014 Academy Awards. Jeremy Freeman/CNN

CNN — The searing drama "12 Years a Slave" was named best picture at the 86th Academy Awards on Sunday night.

The story of Solomon Northup, a free African-American man who was kidnapped and sold into slavery, won just three awards, but they were all major: best picture, best supporting actress (Lupita Nyong'o) and best adapted screenplay (John Ridley).

Brad Pitt, one of the film's producers, accepted on behalf of the film before deferring to its director, a noticeably excited -- and tongue-tied -- Steve McQueen.

"Everyone deserves not just to survive, but to live. This is the most important legacy of Solomon Northup," McQueen said.

He added, "This is for all the people who have endured slavery, and the 21 million people who still endure slavery today."

Nyong'o, a newcomer, paid tribute to her character, Patsey, a slave in 1840s Louisiana. Her voice cracked as she spoke.

"It doesn't escape me for one moment that so much joy in my life is because of so much pain in someone else's," she said.

The force of 'Gravity'

"Gravity" topped all films with seven Oscars, including an award for director Alfonso Cuaron.

The Mexican director devoted four years of his life to making the technically challenging film about a space mission gone wrong. He's the first Latin American to win the award.

As expected, Cate Blanchett won best actress for her turn as a modern-day Blanche DuBois in the Woody Allen film "Blue Jasmine."

Blanchett praised films with female protagonists. Female-centric movies are "not niche -- they make money!" she exclaimed to an ovation.

"Let It Go," from the animated film "Frozen," won best song. Robert Lopez, one of its songwriters, became an EGOT with his Oscar win: He now has an Emmy, Grammy, Oscar and Tony. "Frozen" also for won best animated feature.

One of the evening's highlights was Darlene Love, one of the singers featured in documentary winner "20 Feet From Stardom." Love launched into an impromptu version of "His Eye Is on the Sparrow" upon the film's win, and her full-throated take brought down the house.

"American Hustle," which had tied "Gravity" for the most Oscar nominations (10), was completely shut out at the awards ceremony.

Oscar host Ellen DeGeneres managed to set a social media record with a celebrity-filled selfie that was retweeted more times than any photograph in Twitter history.

She went into the audience and gathered a number of stars -- including Meryl Streep, Kevin Spacey and Bradley Cooper, who shot the image -- and encouraged people to send it around the world. She had a pretty good head start, given that she has more than 25 million followers on Twitter.

DeGeneres was generally loose and low-key throughout the broadcast, inspiring smiles more than laughs. In her opening monologue, she cracked the usual jokes about Hollywood and image. Later, she went into the audience to ask if anyone wanted a pizza -- and later borrowed Pharrell's famous hat to collect a few bucks for payment.

There were also some somber moments.

The "In Memoriam" segment, which has received scrutiny in recent years after certain omissions, included notables who recently died -- among them Sid Caesar, Harold Ramis and Shirley Temple Black -- and concluded with Philip Seymour Hoffman. And when he took the stage to present the award for best cinematography, Bill Murray worked in a shout-out for his old "Ghostbusters" and "Groundhog Day" friend Ramis.

Blues in the night

On the red carpet, blue was the color of choice for many stars.

Jennifer Lawrence was an exception: She was in a striking red dress.

But for "12 Years" actress Alfre Woodard, very little of the glitter mattered.

Asked by CNN's Piers Morgan what she was wearing, Woodard laughingly turned the question back toward the work that got all the nominees to the red carpet in the first place.

"I hope I'm wearing my talent tonight," she said.