At Oscars, black artists show they're here to stay 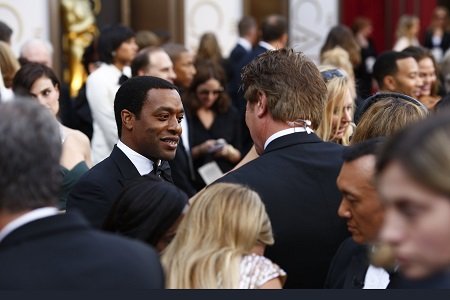 Chiwetel Ejiofor on the red carpet before the 2014 Academy Awards. Credit: Jeremy Freeman/CNN

CNN — When, in 2002, Denzel Washington and Halle Berry won both lead-acting honors at the Academy Awards, pundits and spin doctors were anxious to declare that the Oscars had achieved a great black apotheosis.

As in "12 Years a Slave," which won three Oscars at Sunday night's ceremony. These included best picture, a prize many believed would go to its closest competitor, the space thriller "Gravity" -- a film that did win seven Oscars of its own Sunday night, including one for its director, Alfonso Cuaron.

And though "Slave's" British director Steve McQueen missed out on becoming the first black filmmaker to win for best director, it seemed altogether appropriate for him to have had the last word with best picture during a ceremony more auspicious for African-American talent than any of its predecessors.

Whether it was the thunderous ovation that greeted Lupita Nyong'o as she accepted the best supporting actress prize for "12 Years a Slave," or the rousing reception that veteran pop vocalist Darlene Love received for her spontaneous a capella chorus of "His Eye is on the Sparrow" as the documentary "20 Feet from Stardom" received the best documentary prize, there was a sense that in the variety of awards and recognition, black artists in film were no longer announcing their arrival. They were there to stay.

This prospect gets further context in a year that also saw the release of two commercially successful films, "Fruitvale Station" and "Lee Daniels' The Butler," that both emerged from and further stimulated the ongoing transition in America's racial dialogue.

And if there was any doubt as to the significance of this night's milestones, it was emphatically erased by the appearance of 87-year-old Sidney Poitier, who, though frail and struggling to speak, nonetheless accepted a sustained standing ovation from the audience as he leaned on Angelina Jolie for support. He was there to mark the 50th anniversary of his groundbreaking win of the 1963 best actor Oscar for "Lilies of the Field."

He and Jolie presented screenwriting honors, one of which went to John Ridley, whose win for best adapted screenplay for "12 Years a Slave" made him only the second African-American to win a writing Oscar.

These were the most momentous aspects of a ceremony that otherwise cruised along in a laid-back groove, conspicuous in its relative dearth of snarkiness, thanks mostly to this year's host, Ellen DeGeneres, a daytime-TV-certified Nice Person, whose female impersonator joke at Liza Minnelli's expense early in the proceedings was about as nasty as things got all night.

And while Minnelli did not look amused at first, she seemed an enthusiastic participant in the evening's most "tweet" running gag: the "selfie" riff. DeGeneres spread it out into the audience, drawing Meryl Streep and everybody else in the first rows into a selfie that quickly set a retweet record, and apparently temporarily broke Twitter's platform. It all seemed very baggy-sweater cozy and fun to watch.

But would it be, well, snarky to suggest that the camera phone she was springing into action was provided by Samsung, one of the broadcast's biggest sponsors?

It's tough playing the spoilsport for what some might consider the sweetest Academy Awards ceremony in years -- and others might call the most cloying. There was little opportunity for embarrassment as the evening clipped cheerfully along, and even the disorienting sight of 81-year-old Kim Novak's facelift was mitigated by best actor winner Matthew McConaughey's courtly grace as they presented the animation prizes.

One remembers what novelist and screenwriter Raymond Chandler once wrote about the awards back in 1949 -- that they are a manifestation of Hollywood's "chronic case of spurious excitement over absolutely nothing."

He's still not altogether wrong. Any Academy Awards ceremony can seem like a water drop on the linoleum counter of history. It leaves no stain, no residue. It just evaporates.

The opinions expressed in this commentary are solely those of Gene Seymour.