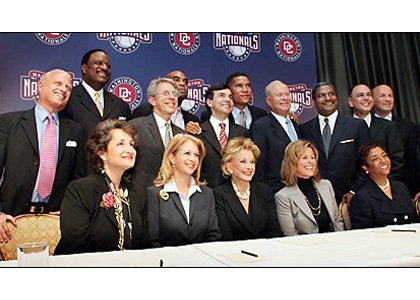 The group of minority owners of the Washington Nationals Baseball Team. Faye Fields is seated fifth from the left. Fields prides herself for helping others to thrive in an often- unforgiving corporate world. She seeks to provide African Americans with opportunities in corporate America and she enjoys watching the success of those she has provided a helping hand. Courtesy Photo/The Lerner Companies

Faye Ford Fields is the very definition of a mogul. She is president and CEO of Integrated Resource Technologies, Inc. (IRT), a Virginia-based company that provides intelligence support solutions, security services operational support to the Department of Defense and intelligence organizations. She is also part owner of the Washington Nationals baseball team, a rarity for an African American woman in the sports world.

While her professional accomplishments are certainly to be admired, Fields prides herself for helping others to thrive in an often-unforgiving corporate world.

“I don’t think that there’s one thing that drives me because I’ve been driven most of my life and I’ve put everything that I have into the things that I do,” she said.

Fields, who founded IRT in 1986, seeks to provide African Americans with opportunities in corporate America.

Her company makes a conscious effort to place African Americans in key positions, where they can assist the company’s mission.

A graduate of the University of Cincinnati with a degree in nursing, Fields previously worked for several small businesses in the Washington, D.C. area. Fields also earned a master’s degree in adult psychiatric nursing and completed course work for her Ph.D. in organizational behavior.

“I worked for a company that was started by a retired Air Force colonel and then worked for another retired colonel,” Fields said. “One thing has always led to another and that’s been the story with me.”

However as a woman, particularly a black woman, Fields had to work very hard for her accomplishments.

“I’d get all of these accolades when I worked for a defense company, but when I started my business and showed up as a woman, the attitudes changed,” Fields said. “A part of me bristled at that, while another part of me said you have to adjust, do what you need to do to overcome that obstacle because there are always a way around barriers.”

Fields credits Neil Muldrow, the retired president and chief executive officer and director of the Development Credit Fund, with providing her one of her first breaks in corporate America.

“When I started, I couldn’t get any kind of financing despite already having two government contracts, one worth $7 million and the other worth $3 million,” Fields said. “Banks just wouldn’t lend to [female] business owners, so I had to get a big corporate backer.”

Fields refused to be discouraged and Muldrow helped to secure some funding for her. That experience also taught her a valuable lesson.

“Women were not taken seriously, so each time I’d go somewhere, I’d make sure to show up with a man and it worked,” Fields said. “You go with what works. Even today, it’s tough for women, but you can’t be discouraged.”

Fields has continued to display courage and tenacity, becoming part owner of the Nationals, a board member of Group Hospitalization and Medical Services Inc., and serving on the board of directors of the Girls Scout Council of the Nation’s Capital.

She was asked by the Small Business Association (SBA) to lead a 2010 session on successful graduation from the SBA’s business development program and Fields received selection as one of nine individuals that were featured in the 2007 book, “Gems of Wisdom for Succeeding in the Business Development and Beyond Program.”

Fields isn’t sure how much longer she’ll remain at her company because she feels that the time is approaching where she should enjoy life and the vast fruits of her labor, although she won’t ever become completely idle.

She says it’s important that business owners be willing to put in the needed time and to make sacrifices.

“Too many young people want everything now. They don’t want to make sacrifices and they don’t want to work hard,” Fields said. “I had parents who had high expectations and my mother would tell me that I could do anything I wanted to do if I worked hard and, over time, that lesson took.”

Fields is proud to be able to help others and enjoys watching the success of those she has provided a helping hand.