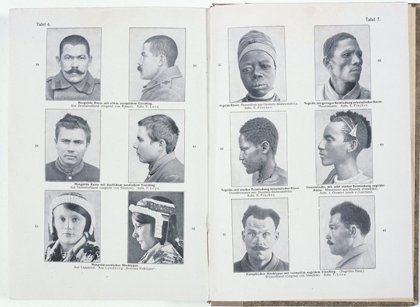 Most western anthropologists classified people into races based on physical traits such as head size, eye, hair and skin color. US Holocaust Memorial Museum Courtesy Photo

BALTIMORE — Cruelty in the name of science, as practiced by Germany’s Nazi regime, is the subject of an exhibition produced by the U.S. Holocaust Memorial Museum in Washington, D.C., and hosted by the Health Sciences and Human Services Library at the University of Maryland, Baltimore (UMB) from February 28 – April 30, 2014.

The exhibition —"Deadly Medicine: Creating the Master Race," which includes reproductions of photographs and documents, films, and survivor testimony, traces how the persecution of groups deemed biologically inferior led to the near annihilation of European Jewry in the 20th century. It also challenges viewers to reflect on the present-day interest in genetic manipulation that promotes the possibility of human perfection.

"'Deadly Medicine' explores the Holocaust’s roots in then-contemporary scientific and pseudo-scientific thought," explains exhibition curator Susan Bachrach. "At the same time, it touches on complex ethical issues we face today, such as how societies acquire and use scientific knowledge and how they balance the rights of the individual with the needs of the larger community."

A key part of the exhibition focuses on Eugenics; a pseudo-scientific belief asserting that Charles Darwin's theories of "survival of the fittest" could be applied to humans. Eugenics supporters believed that through careful controls on marriage and reproduction, a nation's genetic health could be improved.

"This exhibit is a stark reminder of the dangerous turns that scientific research can take when it proceeds without careful ethical reflection, says University of Maryland Francis King Carey School of Law Professor Leslie Meltzer Henry, a bioethics scholar. "As we think about scientific progress in the future, and how to prevent atrocities like the ones depicted in the exhibit, our conversations should be guided by thoughtful attention to medical ethics and legal protections for human research subjects."

The Nazi regime was founded on the conviction that "inferior" races, including the so-called Jewish race, and individuals had to be eliminated from German society so that the fittest "Aryans" could thrive. By the end of World War II, six-million Jews had been murdered. Millions of others also became victims of persecution and murder through Nazi "racial hygiene" programs designed to cleanse Germany of "biological threats" to the nation’s "health," including "foreign-blooded" Roma and Sinti (Gypsies) persons diagnosed as "hereditarily ill," and homosexuals.

"Deadly Medicine" will be on display at UMB’s Health Sciences and Human Services Library located at 601 West Lombard Street in Baltimore until April 30, 2014. The exhibition is free and open to the public.

For further information about the exhibit, visit http://www.hshsl.umaryland.edu/gallery.