President proves he is his ‘brother’s keeper’ 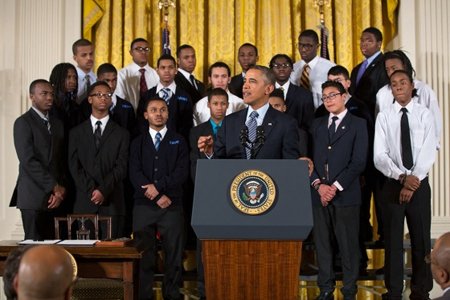 President Barack Obama delivered remarks at an event to highlight "My Brother's Keeper," an initiative to expand opportunity for young men and boys of color, in the East Room of the White House, on Thursday, February 27, 2014. Official White House photo/Pete Souza

After five years in the Oval Office and facing increasing skepticism from many of the 93 percent of black voters who helped him become the first African American president, on Thursday, February 27, 2014, Obama stood as a peer to that particular constituency.

“When you’re coming in as the first African American president, there’s a sort of expectation that you’re going to do things to help your community,” said journalist LZ Granderson, 41, who writes for CNN and ESPN. “And, he’s been criticized for not doing that and it’s tricky for him, because he doesn’t want to be perceived as the president of black people. ”

“He wants to be perceived as the president of the United States.”

During an emotional announcement at the White House, the president unveiled a new $200 million, five-year initiative designed to help young African American men.

The initiative, “My Brother’s Keeper,” seeks to make sure that every young person of color who’s willing to work hard and lift themselves up has an opportunity to get ahead and reach their full potential.

Relating to the plight of many young blacks, Obama spoke of growing up without a father and how, as a teenager, he didn’t care much for school and he even indulged in drug use.

“I didn’t have a dad in the house and I was angry about it, even though I didn’t necessarily realize it at the time,” Obama said in front of invited guests and a throng of media. “I made bad choices. I got high without always thinking about the harm that it could do. I didn’t always take school as seriously as I should have. I made excuses. Sometimes I sold myself short.”

The president’s speech proved as powerful as his initiative and many said it finally provided African Americans tangible evidence that Obama is deserving of role model status.

“This is what we’ve been waiting for,” said Amanda Russell, a Temple Hills, Maryland waitress who is single with three young sons.

“When [Obama] was first elected, I thought about how seeing this black man in that position could provide some sort of inspiration for them because it is hard raising children on your own,” said Russell, 37. “But, I didn’t feel like I had much to point to with Obama, until now because he came off finally as one of us and not aloof.”

The president says he deplores America’s numbness to the plight of young black men, who face much higher odds of succeeding than whites.

He said the idea for the new initiative occurred to him after a black unarmed Florida teenager, Trayvon Martin, died in 2012 of gunshot wounds at the hands of neighborhood watch captain George Zimmerman.

In unveiling the initiative, Obama listed several statistics to demonstrate the odds facing black youth, including the prevalence of school suspensions, literacy problems, and the fact that jails and prisons are filled mostly with African Americans.

“This is a moral issue in our country,” Obama said. “We just assume this is an inevitable part of American life, instead of the outrage that it is. These statistics should break our hearts and they should compel us to act.”