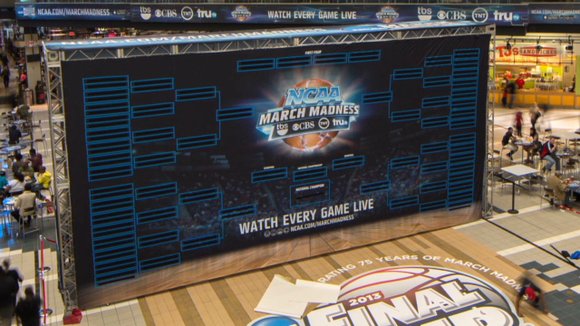 Visitors to CNN Center in Atlanta can check out the 2013 NCAA Basketball Tournament Bracket on a giant screen set up in the atrium. As part of a marketing campaign Turner Sports set up the 32-foot NCAA tournament bracket to get fan excitment going. CNN

NEW YORK (CNNMoney) — No one is likely to win the Warren Buffett-backed $1 billion prize offered by Yahoo and Quicken Loans to whoever can pick a perfect NCAA bracket. But there will still be big-dollar winners after this year's tournament.

Those winners will be the schools splitting the $1.4 billion in revenue that big-time men's college basketball produces over the course of a year.

Schools disclosed the revenue figure in filings with the Department of Education for the 2012-13 school year, the most recent for which figures are available. The record haul is up 5% from the previous school year.

The University of Louisville once again has the richest basketball program in the country. Its men's team had revenue of $42.4 million, producing a $26.7 million profit.

The biggest part of college basketball's revenue comes from the 14-year broadcast contract between the NCAA and CBS and Time Warner unit Turner Sports. The $11 billion deal is mainly for the rights to broadcast the men's tournament games. CNNMoney is also a unit of Time Warner.

The profitability of the programs hasn't gone unnoticed by the athletes.