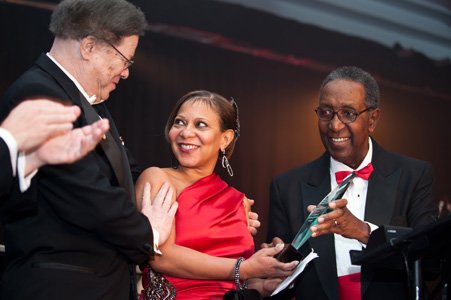 With a national epidemic of rising diabetes, obesity and heart disease, a team of African American physicians at Johns Hopkins Medical School is leading an effort to educate the public and produce a new generation of researchers and advocates promoting healthy hearts. Lisa Cooper, MD, MPH is the James F. Fries Professor of Medicine at Johns Hopkins Medical School and director of the Center to Eliminate Cardiovascular Health Disparities in East Baltimore.

Cooper’s mission is to develop community partners with a community advisory board to educate the public on heart disease and to help train the next generation of researchers in cardiovascular disparities. A major component of her mission also includes conducting research to test programs to improve management and outcomes of hypertension, also known as high blood pressure.

Recently, Dr. Cooper participated in an interview for the documentary film, “Faces of Diabetes.” Research reveals a strong link between diabetes and cardiovascular disease. In the interview, she discussed the link between the rising rate of diabetes and how it impacts cardiovascular disease including heart attack, stroke and hypertension. She also had strong praises for a mentor who helped establish her dedication and approach to medical research.

Dr. Cooper praised her mentor Dr. Elijah Saunders, a cardiologist and professor at University of Maryland Medical School. Dr. Saunders is a pioneer in conducting scholarly research on African Americans with hypertension. He was the first to coin the term— hypertension is “The Silent Killer.” He is a founding member of the International Society Hypertension in Blacks (ISHIB). In a real and meaningful way, Dr. Cooper is now expanding the research pioneered by Dr. Saunders more than 30 years ago. The baton for research on hypertension is being passed from Dr. Saunders to Dr. Cooper’s generation.

Dr. Cooper is the inaugural recipient of the American Heart Association’s Watkins-Saunders Award in 2013. The award recognizes excellence in clinical, medical, and community work focused on diminishing healthcare disparities in Maryland. Dr. Cooper trained with Dr. Elijah Saunders when she was a resident at the University of Maryland Medical Center and with Dr. Levi Watkins during her early years as a faculty member at Johns Hopkins. She describes herself as “honored and humbled” to have received this award that bears both their names.

“Dr. Elijah Saunders inspired me and motivated me as a young physician and enhanced my interest in medical research”, said Dr. Cooper. “When I was a resident training under Dr. Saunders, I was impressed about how he genuinely cared for his patients and made the young doctors realize that each patient was personally important to him. He set a very high bar for competency and caring.”

Dr. Cooper is the principle investigator for the Center to Eliminate Cardiovascular Disparities funded by a grant from National Institutes of Health. “We are grateful to Dr. Lisa Cooper for her dedication to eliminate cardiovascular health disparities,” said Maurice Hunt, founder and CEO of Diabetes Awareness Project. “All the research indicates that there is a direct connection between hypertension and diabetes, and her program will help African Americans understand that controlling one’s hypertension will probably help control one’s diabetes.”