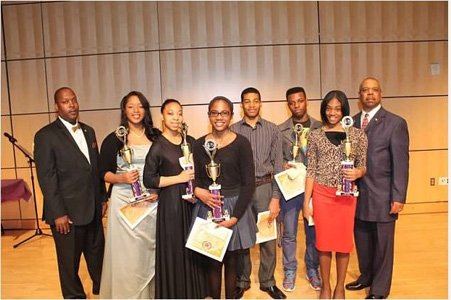 The Talent Hunt demonstration was created in 1945 out of the Fraternity’s Sixth District (North Carolina and South Carolina), and is one of the international projects of the Omega Psi Phi Fraternity. Pi Omega has participated in this activity for over 50 years, and many talented high school students have benefited from this project through all-expenses paid trips, U.S. Savings Bonds, trophies, certificates, print and televised media exposure.

Students from public and private schools in Baltimore City, Baltimore County and the surrounding area participated in this year’s competition.

Selected winners from the competition will represent Pi Omega Chapter at the District Talent Hunt Competition to be held at the 66th Second District Conference the BWI Marriott in Linthicum, Maryland the weekend of April 24-27, 2014.

Bro. John Berkley served as the chairperson for the 58th Annual Bro. Kelvin J. O’Neal Talent Hunt. Bro. Ronald Williams did an outstanding job as MC for this event. Special thanks are extended to the Pi Omega Foundation for providing the funding for this year’s competition.