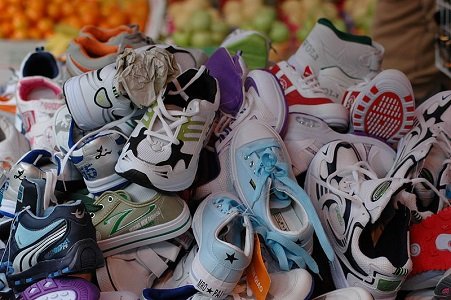 BALTIMORE — Attention anyone with a closet: Those shoes that you no longer want are desperately needed to fight the human tragedy of global poverty.

That’s the message being delivered by Fairmount Bank, which has launched a drive to collect shoes to help the poor. Used and new shoes can be dropped off at the bank’s location at 8216 Philadelphia Road, Baltimore, MD, 21237 until April 29, 2014.

The shoes that Fairmount Bank collects will be delivered to Soles4Souls, an international anti-poverty organization that monetizes used shoes and clothing to create sustainable jobs and fund direct relief efforts, including distribution of new shoes and clothing. Founded in 2007, the organization has distributed more than 25 million shoes in well over 100 countries.

“Fairmount Bank is supporting Soles4Souls because it is the definition of a social enterprise where solid business practices are used to create positive change in people’s lives,” said Joseph M. Solomon, President/CEO. “Fairmount Bank, Baltimore, MD is a strong supporter of Soles4Souls’ anti-poverty mission, and we hope to take a big step in providing the organization with the used shoes they require to keep making a difference for people in need.”

Soles4Souls— which holds the highest rating from nonprofit watchdog Charity Navigator— will convert every used pair of shoes collected from the community into a value-added social currency to achieve positive change, both humanitarian and economic. Most of the reusable shoes will be distributed to micro enterprise programs that create jobs in Haiti and other poor nations. The resulting revenue will help fund the free distribution of new shoes in the U.S. and overseas. Among its relief programs, the organization has distributed over 50,000 new pairs of shoes to help Philippine victims of Typhoon Haiyan.

The connection between poverty and shoes is well documented. The World Bank estimates that approximately 400 million children worldwide— more than the entire U.S. population— live in pronounced poverty. Millions of these children will grow up never having had a pair of shoes, resulting in significant ramifications for their health and well being. Lacking proper footwear, countless children will not be able or permitted to attend school. And tens of millions of these poverty-stricken, barefoot boys and girls will be infected with soil-transmitted parasitic diseases like hookworm, causing lasting suffering and lifelong debilitation.

“The simple truth is that almost anyone with a closet has shoes they don’t wear, or an old pair that will just end up in a landfill,” said Joseph M Solomon, President/CEO of Fairmount Bank. “Give those to us, and know that you are taking a step to making the world a better place for all of us.”