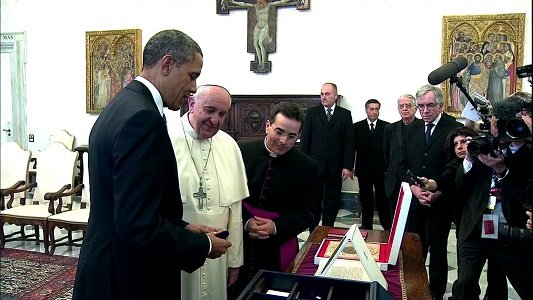 U.S. President Barack Obama and Pope Francis met for the first time at Vatican City. The two world leaders greeted each other with a smile and a handshake, and posed for pictures before sitting down across a table from each other. POOL

CNN — U.S. President Barack Obama and Pope Francis met Thursday for the first time at Vatican City, offering a chance for a reset of sorts between the administration and Catholic leadership following years of strained relations.

The two world leaders greeted each other with a smile and a handshake, and posed for pictures before sitting down across a table from each other.

The goal of the meeting: Focus on areas where two of the world's most influential men agree and gently tread ground where they differ.

The President and the Pontiff will, as the White House said in a statement, focus on "shared commitment to fighting poverty and growing (income) inequality" and gingerly navigate such thornier topics as same-sex marriage, contraception and abortion.

"In general, they'll be looking for areas of conversation where there is great agreement between the Vatican and the administration," said Steve Schneck, director of the Institute for Policy Research and Catholic Studies at the Catholic University of America.

"The Pope will likely bring up immigration in a broad way ... and I do think there's a possibility the bishops' concerns about contraception in the (Affordable Care Act) might be mentioned," Schneck said.

In an interview with the Italian newspaper Corriere della Sera, Obama pointed to the Pope's concern for income inequality, saying, "Given his great moral authority, when the Pope speaks it carries enormous weight."

Continuing to focus on income inequality, Obama said, "And it isn't just an economic issue, it's a moral issue. I think the Pope was speaking to the danger that over time we grow accustomed to this kind of inequality and accept it as normal. But we can't."

The President said he admires the Pope's courage to speak out on economic and social issues.

"It doesn't mean we agree on every issue, but his voice is one that I think the world needs to hear. He challenges us," Obama told the newspaper. "He implores us to remember the people, especially the poor, who are affected by the economic decisions we make."

The law exempts churches and houses of worship from the requirement, but nonprofit, religiously affiliated groups are required either to provide contraception coverage to their employees directly or through a third-party insurer.

The U.S. Conference of Catholic Bishops has been vocal in its opposition to the provision, said Sister Mary Ann Walsh, a spokeswoman for the organization.

"Religious liberties and right-to-life issues are a concern," she said of the tension between American Catholic leadership and the administration. However, "the U.S. bishops have appreciated the administration's cooperation on issues of mutual concern."

Those areas of "mutual concern" include immigration and poverty -- issues where the President and the Pope could find common ground.

Francis underscored his commitment to the plight of immigrants during a trip last year to the Italian island of Lampedusa, a place where thousands of African migrants desperately fleeing political upheaval and poverty pour onto European shores. Many die in the attempt to cross.