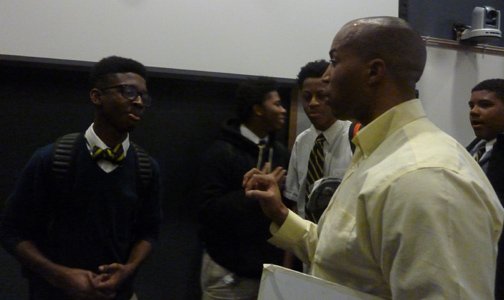 BALTIMORE — Science and professional sports may not always seem to be much of a match, but one former college gridiron star sure makes it appear that the two go together like a quarterback and a wide receiver.

Baratunde “Bara” Cola still loves football, but he works as an assistant professor in the George W. Woodruff School of Mechanical Engineering and School of Materials Science and Engineering at the Georgia Institute of Technology.

He also tours the country, speaking to young people about the importance of an education in the Science, Technology, Engineering and Math— STEM— discipline.

“What I tell kids is that, regardless of what you’re doing and how well you may be doing it now, you just don’t know where you may end up so you need a fall back plan,” said Cola, who starred as a fullback for Vanderbilt University’s football team before tearing the anterior cruciate ligaments in his legs multiple times.

What’s more, the injuries didn’t prevent Cola from returning to the football field and, even after receiving a football scholarship; Cola decided that science would be more exciting and interesting than a pro sports career.

“You get to interact with smart people all of the time and the opportunity to talk to kids is important,” said Cola, who spoke to students at Calvert Hall College High School in Baltimore on March 21.

Honored by President Barack Obama as one of the nation’s promising young innovators, Cola spoke about nanoengineering energy technology ahead of the USA Science & Engineering Festival and Book Fair that is scheduled for next month in Washington, D.C.

The festival allows children and adults to participate in more than 3,000 activities and view live performances by science celebrities and experts. This year’s event will open on April 24, 2014 with, “X-STEM: Extreme STEM Symposium,” featuring interactive presentations and workshop by STEM visionaries, according to a news release.

Cola also is a speaker in the festival’s “Nifty Fifty (times 3) Program” that features a group of 150 noted science and engineering professionals who speak to young people at middle and high schools about their work and careers.

The participants include a variety of scientists visiting Baltimore area schools as guest lecturers ahead of the festival.

Cola, who received a Ph.D. in 2008 from Purdue University, says his research is both fundamental and applied.

“I am currently focused on understanding and designing thermal transport and energy conservation in nanostructures and devices,” he said. “My group develops tools to characterize thermal transport across several orders of scale for this purpose and my research interests also include scalable fabrication of organic and organic-inorganic hybrid nanostructures for novel technological use, which include thermal interface materials, thermo-electrochemical cells, solar rectenna and materials that can be tuned to regulate the flow of heat.”

Cola says there is “lots of cool stuff” happening in STEM and it’s important that young people are included as early as possible.

“We need to change the conservation about science in this country,” Cola said. “We have a shortage of scientists and we must change that. We want kids to see that science can be exciting. It has been for me and there’s still a lot to do.”

Cola, who was born in Detroit and grew up in Florida, says that since he has developed a better understanding of science, football has simply been an afterthought.

“Young people might find that this could be as exciting as scoring a touchdown,” he said.