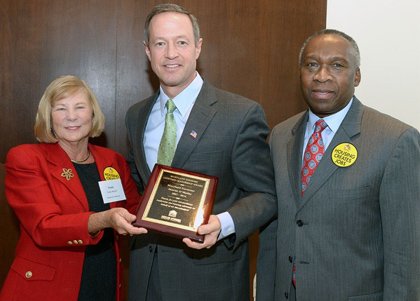 ANNAPOLIS — The Maryland Affordable Housing Coalition (MAHC) presented the Lifetime Leadership Award to Governor Martin O’Malley for his historic contributions to affordable rental housing during his eight years as Maryland Governor on March 25, 2014 at the Coalition’s annual Housing Day event in Annapolis. In making the award, MAHC President Trudy McFall stated, “No Governor in the history of Maryland has contributed more to insuring that the limited income citizens of Maryland have good quality affordable rental housing options. No Governor has understood like Governor O’Malley that an investment in housing creates jobs and stimulates economic growth. The Governor’s leadership has led Maryland to become a national leader and a model for other states in the creation and effective implementation of housing programs.”

During his tenure Governor O’Malley has provided the leadership for a remarkable set of achievements:

• He responded to the MAHC proposal for a new housing initiative and secured funding for two years and requested in his current budget a total of $61.5 million for Rental Housing Works. This program, used in conjunction with tax exempt bonds, has made Maryland the number one issuer of tax exempt bonds in the country in 2013 and secured millions of extra tax credit resources for Maryland.

• During his tenure nearly $2.4 billion in public and private investment has been made in Maryland for affordable rental housing and is generating $375 million in state and local revenues over the next 15 years.

• All of this hard work has resulted in 15,000 units of affordable rental housing and added 28,000 jobs to Maryland’s economy.

Governor O’Malley was given a standing ovation by the crowd of 200 people deeply appreciative of his record and for his contributions to Maryland and its citizens. MAHC closed the presentation by noting that members of the affordable housing community will be “forever grateful that you were our Governor for eight remarkable years.”