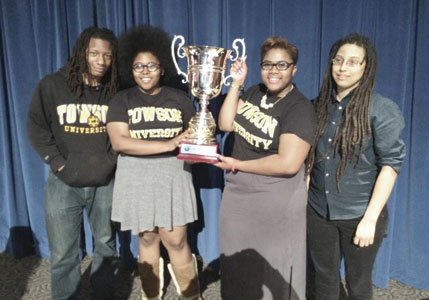 According to Towson University College of Fine Arts and Communication Dean Susan Picinich, "We are thrilled and very proud of Ameena and Korey on this amazing accomplishment. Ameena and Korey are the first team of black women to win a national debate championship. Their historic success is exemplified by their passion, dedication and commitment to the art of debate and the leadership of Towson University's debate coaching staff Amber Kelsie and Ignacio Evans."

“It requires a tremendous amount of work,” says Johnson. "I'm sure I do about four or five hours of preparation and practicing on a normal day.” All of this top-level competition has only honed the students’ skills, according to Johnson. “I think we've improved by learning what type of debaters we are, and playing to our strengths,” she says. “I have learned to do tremendous amounts of work while still taking care of myself and not stressing out too much.”

Founded in 1971 as the Southwest Cross Examination Debate Association, CEDA is the primary national association promoting policy topic intercollegiate academic debate. In cooperation with the National Debate Tournament Committee and the American Debate Association, CEDA formulates the annual intercollegiate policy debate topic used in tournament competition throughout the nation. CEDA acts as a tournament-sanctioning agent. Throughout the tournament season, CEDA calculates the National Sweepstakes Standings, the national and regional rankings of member institutions based on compiled tournament results. The association hosts an annual National Championship Tournament that brings together over 170 individual debate teams from across the nation to compete for a national team championship.

The National Debate Tournament is an invitation only national championship for collegiate policy debate in the United States. The national committee selects 16 teams and awards them a First Round At-Large Bid. These 16 teams are generally considered to be the best

Students in the Towson University Forensics program participate in both speech and debate activities. Students who compete for the team travel to local, regional and national tournaments to engage in individual events, parliamentary debate and/or policy debate. Students have the opportunity to perform speeches and exhibition debates for the campus and local community in the form of performance showcases and public debates.