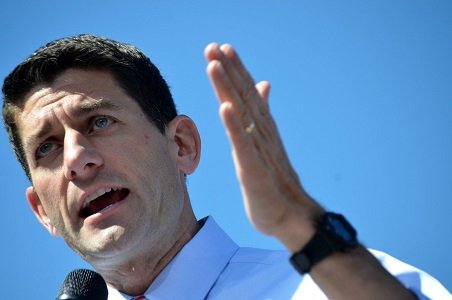 Republican vice presidential nominee Paul Ryan attends a rally in Bristol, Virginia on Thursday, October 25, 2012. At the beginning of the rally, held at Universal Fibers, he was joined on stage by his wife Janna and their three children Liza, Charlie, and Sam. Shanna Sheperd/CNN

(CNN) — It was a much-anticipated summit between Rep. Paul Ryan and the Congressional Black Caucus.

More than a month after the Wisconsin Republican ignited an angry backlash over comments that many viewed as racially insensitive, the House Budget Committee chairman sat down with members of the group to clear the air.

But Wednesday's session on Capitol Hill didn't bridge the gulf between Ryan's philosophy of addressing poverty and that of the black caucus - whose members defend many of the current federal anti-poverty programs that Ryan's proposed budget would cut.

The black caucus chair, Rep. Marcia Fudge, an Ohio Democrat, stood next to Ryan after the closed-door meeting and thanked him for coming. But then she said bluntly that the meeting "didn't get a whole lot accomplished."

She said while the black caucus and Ryan both are concerned about poverty, "we just disagree on how we address the problem."

Ryan opened the meeting explaining his comments a few weeks ago on a radio program - which triggered the invitation to sit down with the group -- didn't come out the way he intended, according to a Democrat who attended the session.

During a March interview with conservative commentator Bill Bennett, Ryan, who has been working on alternative ways to address poverty, said there is a "tailspin of culture, in our inner cities in particular, of men not working and just generations of men not even thinking about working or learning the value and the culture of work."

Many African-American leaders called the comments racially charged and the blowback prompted Ryan to swiftly admit his remarks were "inarticulate."

Fudge referenced the controversy to reporters.

"There was some concern about comments that have been made about the culture in which we find this poverty, but we have agreed today that it is across the board. There is no particular place or people who experience poverty at a different rate than others," she said.

Democrats who attended the meeting said Ryan didn't say sorry, and wasn't asked for an apology.

He told members that sometimes what he's thinking in his head doesn't come across the way he wants and admitted that in the debate going forward, he needed to do a better job at explaining his position.

Rep. Gwen Moore, D-Wisconsin, characterized Ryan's presentation as trying "to walk back" what he said, but she said there are still some black caucus members who believe Ryan was expressing his true feelings.

Ryan explained after the meeting "the point I've been making all along is that we are marginalizing and isolating the poor in our communities and we need to stop doing that as a country."

Ryan, the 2012 GOP vice presidential candidate and a potential White House hopeful next time around, argued "the status quo doesn't work" and said the point of the session with the black caucus was to improve "the tone of the debate so that more people are invited to this debate."

Challenged on his budget

But Ryan also acknowledged that major differences on "macroeconomics and budgets" still existed.

Rep. Jim Clyburn, a Democrat from South Carolina and the top ranking African-American in the House, said he believed Ryan was sincere, but pointed to his proposed budget and said flatly "if he stands by his resolution than he can't be serious about the discussion we had today."

CBC members challenged Ryan about the more than $900 billion in cuts to discretionary programs in his budget, saying they didn't mesh with his stated commitment to helping the poor, pointing specifically to his effort to repeal Obamacare and target social welfare programs in his proposal.

According to Moore, Ryan "punted, saying it was members on the House Appropriations Committee who get to decide which federal programs would actually see cuts."

Ryan's work on poverty issues dates to the 1990s when he was an aide to the late GOP vice presidential candidate Jack Kemp, who headed a policy group called "Empower America." Kemp visited poor neighborhoods and pushed proposals to earmark federal and private resources to "empowerment zones" to lift people out of poverty.

Over the past year, Ryan has traveled to a dozen communities around the United States to learn about efforts to reduce poverty and promote more economic opportunity through mostly charitable organizations.

He is expected to unveil his own anti-poverty plans this summer. But it's unclear if he will introduce legislative proposals or just some concepts to continue the debate about the Republican party's alternatives to current federal policy.