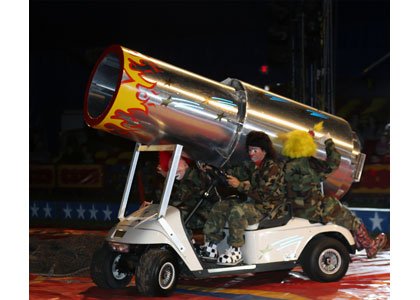 There is rarely anything more exciting than when the circus comes to town and for the Optimist Club of Annapolis, there are stories aplenty about the Cole Brothers Circus of Stars that will fascinate those young and young at heart.

“The stories are fascinating about the circus, the history, the business and artistry involved and it’s enduring influence on the public,” Anne Ward of the Annapolis Optimist Club, said in an email. “The Cole Brothers Circus remains the only circus to have survived a century still appearing much as it did 150 years ago.”

Now in its 130th year, the circus is scheduled for Wednesday, May 7 and Thursday, May 8, 2014, at the Anne Arundel County Fairgrounds on Generals Highway in Gambrills.

“It’s one of our two biggest fundraisers of the year and it’s just a delight to work with the circus and see the excitement everyone has,” said Diann Turner, the circus fundraiser co-chair and a past president of the Annapolis Optimist Club.

A civic organization with a purpose to develop optimism as a philosophy for life while following the tenets of the Optimist Creed, the Optimist Club of Annapolis has provided scholastic, athletic and community oriented activities in the area for more than 40 years, according to club officials.

Turner says that the circus is a one-of-a-kind event that the club relishes each year.

“This is different from any other circus. You’ll go there and see people who are showing you to your seat, but later you’ll see those same folks end up being performers as well,” Turner said.

What makes the event all the more memorable is that it all takes place on the grass of the fairgrounds, allowing audience members birds-eye views of the show, Turner said.

“You’re outside and you’re able to enjoy the fairgrounds as well and, what’s neat is that so many have been coming for years. We have grandparents bringing their grandchildren. Generations have seen it,” she said.

Among the favorites are Mexico’s “Angels in the Air” trapeze artists, daredevils performing stunts in ThunderDrome and the Cole Brothers Clown Crew. Of course, acrobats will also be featured, as will tigers, jugglers and a human cannonball, circus officials said.

William Washington Cole began the tradition of the Cole Brothers Circus in 1884 and, by the Great Depression in the early 20th century the family had gained a reputation as highly esteemed professionals in the circus industry who, despite hardships, kept the show on the road, officials said.

Today, families from around the country eagerly anticipate the arrival of the circus. In a as a fitting tribute to the legacy of William Washington Cole, the current owner, John Pugh, is committed to the tradition of presenting in a reputable manner by reputable individuals the real, American, three-ring circus under the Big Top.

“It’s a great experience for people of all ages to be able to see and be that close to the actual performers, the animals, to the ring,” Turner said. “At other circus, it’s indoors and there are tons of people and you’re so far away. Here, there’s not a seat in the tent where you’re not that far away from the action. It’s just so much fun, everyone must come out and see this circus.”