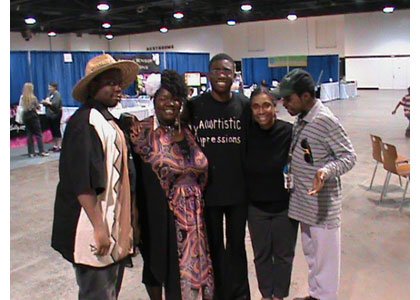 BALTIMORE — Donte Lewis is a budding entrepreneur with just one wish. He wants to be as successful in his media interests as his mother Angelia Lewis is with her natural hair care business.

“I want to take my business to the next level, be more like my mom because she’s done such a great job building her company and being successful,” said Lewis, 24.

While his mother certainly has worked hard to succeed while raising two sons on the autism spectrum, even she concedes that her son’s battle with autism provides an obstacle that has never been easy to overcome.

Bullied in middle school and told later by a school counselor that he should consider dropping pursuit of a degree; Donte proved undaunted and stubbornly drew on the support of his family, friends and his belief in God.

“The Devil is a liar and you have to fight to your wits end,” he said.

That fight continued despite studies that suggest that as little as three percent of autistic children are able to recover and live normal lives. Even with regular therapy, which is often carefully designed educational and social activities, the vast majority are unable to lead regular lives, according to officials at the National Autism Association.

April is Autism Awareness Month and Donte has taken the to prove that success can be achieved. He operates his own small business, D.J. L’s Media Services, which specializes in videography, photography, video advertisements and journalism.

He says that he is currently seeking a part-time journalism job to help support his business endeavor. He keeps busy by filming birthday parties, weddings and other gatherings for family, friends and clients.

“I do all of my mom’s shows and other events,” he said.

Donte has earned an associates degree in IT-Multimedia at the ITT Technical Institute in Baltimore. He was inducted into the National Technical Honor Society and graduated with a 3.42 grade point average.

“It’s determination on my part,” he said. “I guess I’m always willing to go the extra mile and even though it’s challenging, I haven’t let autism stand in the way.”

There’s no known single cause for autism, but health officials said it’s generally accepted that it’s caused by abnormalities in brain structure and function. In many families, there appears to be a pattern of autism or related disabilities, further supporting the theory that the disorder has a genetic basis.

The characteristic behaviors of autism spectrum disorder could be apparent in infancy, but usually become obvious during early childhood ages of between 24 months to six years, according to the nonprofit, Autism Society.

Symptoms could include a baby not babbling, cooing or gesturing by 12 months old; has not uttered a single word by 16 months; does not say two-word phrases on his own by 24 months; or has any loss of any language or social skill at any age.

About 1 percent of the population of children in the U.S. ages 3 to 17 have an autism spectrum disorder and 1 to 1.5 million Americans live with autism while just 56 percent of students with the illness complete high school.

About a decade ago, Donte started a social club for young people with autism, called “Boys Nite Out,” where anyone on the spectrum can get together for lunch and encouraging interaction.

Recently, he wrote, produced, directed and starred in a show that he titled, “The Chunky Willis Show.”

“We just thought that it would be something that all of us with autism could relate to because most of us on the autism spectrum have a lot in common like movies, video games and sports,” he said.

“Boys Nite Out” has been a successful tool in helping Donte and his friends cope with the various challenges they face and it has helped to boost their confidence in their social lives, according to Donte.

“I always say that I may have autism, but autism doesn’t have me,” Donte said. “I just want everyone, every parent to know, that when their child has been diagnosed, it’s not a diagnosis that says they cannot achieve. They shouldn’t panic and think that they can’t do this or they won’t be able to do that. It’s challenging for sure, but we can still achieve and I’m going to be a success, God willing.”