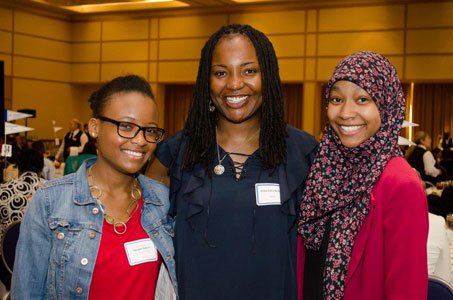 2013 scholarship recipients Morgan Greene (University of Miami) and Thaakirah Cason (University of Baltimore) with Aisha DaCosta (center), founder and executive director of “I Am O’Kah! Inc,” a nonprofit that serves the Greater Baltimore area by providing urban youth with opportunities through mentorship, education and scholarships. Courtesy Photo

BALTIMORE — Aisha DaCosta and her siblings grew up on old-fashioned principals instilled in them by Jamaican-born parents: get an education, a good career and retire with a decent pension that will carry you through your golden years.

“Most Caribbean children can attest to the fact that when people ask, what is it that you want to do when you grow up, there are usually two answers. Become a doctor or a lawyer,” DaCosta said. “That’s probably true for most with an immigrant background because that’s how our parents defined security.”

However DaCosta, who lives in Baltimore says it’s important that young people and their parents begin to think outside of the box because times have changed. The formula of a good education, well-paying job and a sufficient retirement package could fall short of meeting the needs of a new generation.

“That plan worked for my grandparents, they received a pension from their employers and they were able to retire before they were 60,” she said. “When my grandfather passed away, my grandmother got his pension. But, that plan broke and it didn’t work for my mother and she’s approaching 65 now and certainly that plan isn’t working for me even though I enlisted in the military right after high school and became an officer who fought in the combat zone in Iraq.”

With that information and recalling the gallant but ultimately failed fight her sister, Kahdine Ann DaCosta, waged against breast cancer in 2004, DaCosta started, “I am OKah!,” in 2011, a nonprofit that serves the Greater Baltimore area by providing urban youth with opportunities through mentorship, education, and scholarships.

“The goal is not just providing the scholarships, but mentorship that fosters self-reliance, self-esteem, character building, and leadership and entrepreneurship,” DaCosta said.

When her late sister attended Morgan State University, DaCosta said one of the most obvious voids proved to be the lack of mentorship. “While she was there, my sister realized that although she could get money for college, she didn’t have the support system there that she needed.”

“Money isn’t always enough and, of course my sister passed away from breast cancer in February 2004 when she was just 26. Instead of doing things like breast cancer walks, I decided to memorialize her by picking up the dream that she left which was to start an organization that provides scholarships and mentorship.”

It took a few years, but momentum has started to build for “I am OKah!”

“I think we’ve really caught some traction, especially this year because we’ve given out, to date, four $1,000 scholarships to children that have graduated from Baltimore area high schools and, this year, we’re on pace to give two more $1,000 scholarships,” DaCosta said.

In January, the organization opened what DaCosta dubbed an entrepreneurship financial rock star academy, which she says is an outgrowth of she and her sister’s own entrepreneurial blueprint.

The Financial Rockstar Academy provides entrepreneurship and financial literacy training to local students in grades four to 12. This year it already has provided courses to more than 64 students at Mars Estates Elementary in Essex, including opportunities for students to interview business owners and to develop ideas through classroom lessons and workshops.

“The tweaking of our parents’ plan is teaching children today from a young age how to take their thoughts, creativity and imagination and turn their innovation into income,” DaCosta said. “By this method, they will have several years of practice, with their parents’ support. It’s a good time to practice business. What we’re trying to do with entrepreneurship is use it in live as a proactive approach to help our children unlock their greatest potential and for them to not be afraid to step out of the box.”

She says that’s what her sister envisioned and she is committed to carrying that torch.

The organization’s first big gala titled “Be Amazing” is aimed at continuing DaCosta’s crusade against socio-economic barriers to success will be held on Saturday, May 17, 2014 at the Maryland Historical Society located at 201 W. Monument Street in Baltimore City at 7 p.m.

In repeating the theme from the organization’s 2013 annual report, DaCosta says that it’s important that will and skill are instilled in young children.

“The size of the expectations you hold for yourself fuels your willingness to put in a massive amount of effort into attaining your goals,” she said.

For more information about “I am OKah,” or to purchase tickets to the event, visit: www.iamokah.org.